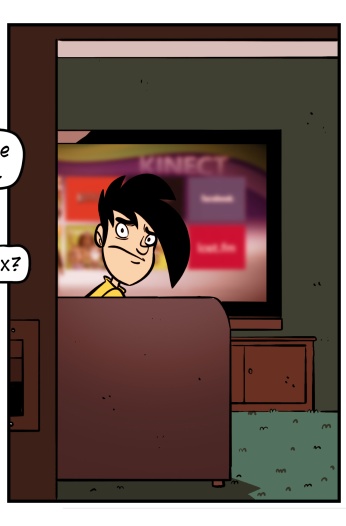 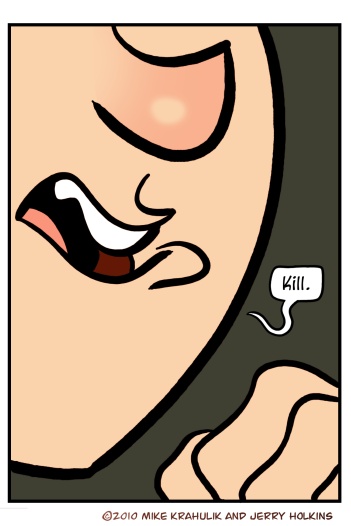 Our experience with Kinect voice commands was odd, powerful, almost unsettling. This is incredibly interesting as a piece of technology, and as a means of instructing technology to do what we want it to. You will have a variety of experiences with this device, some of which are truly fascinating, some of which don't work entirely, and some of which will make you believe every terrible thing you have read on the Internet is true.

We've tried a bunch of games here at the office, a lot of games, and what becomes clear very quickly is that every developer seems to have a different idea about what constitutes a progressive, conceptually stable interface. There's two problems, here. There are probably more than two. But here are the two with the blink tag applied.

First off, I don't know if we're ready for this quite yet, and by "we" I mean "human beings" - those on either prong of the consumption/creation axis. I would love to be wrong on this. But there aren't really any ground rules for either party. When your interactions work well, believe it: it's revolutionary. When they don't, and believe it, they wont, you may feel it's the other part of the revolution. Specifically, the one where blood is always coming out.

People make a big deal about buttons, and buttons are cool, because of how they are discrete interactive switches bound to particular functions. But beyond the idea of "buttons" generally, let's talk about the specifics: you don't have a B button, which (like the PS3's Circle button) reliably gets you out of shit you don't want. By holding your left hand down at an angle, you can usually get to a menu that will let you do... something. It's not really standardized. Sonic Free Riders is a miserable game, but it has it's own spin on the "hover over" UI scheme that has pep, and Adrenaline Misfits has an approach to menu interactions that is also very crisp. Understand that the first time I saw the Misfits Method, I couldn't make sense of it at all. I couldn't discern that the icons on the screen were not mere buttons, in the classic sense, but rather a kind of pictogram telling me how I could hold my body to bring about the desired result. The way you say Okay in Adrenaline Misfits is to hold up your hand, as though waiting to be called on by a teacher. It's fast, and satisfying. Sonic Free Riders is, again, a hate crime. But the way you skip cinematics is to point angrily at the screen, which I discovered by doing that.

What I'm getting at is that this is the Wild Fucking West. No, because even the Wildest Wild-ass muhfucking West is at least underpinned by universally recognized tropes. With Kinect, it's like we're emerging from a cave trying to blink away the sunlight.  We barely have verbs.

The Amelioration Engine for problems like these is to have the Kinect's (in our experience sophisticated and reliable) voice recognition handle a suite of these needs in a universal way. But Voice isn't always being detected by the device, and once you fall in love with it you'll find out just how limited your access to it is. You'll want it everywhere, and it's just... not. You'll want it to inform your experiences with the machine at a fundamental level. You'll want it in charge of your days, and your nights. You will want it to wait in there to hear the desires of your heart, bottled up, like a djinn.

From the dashboard, you open the Kinect Hub by saying "Xbox Kinect," but from other voice activated realms you invoke it with "Kinect Hub" for some reason. You'll bring up  applications with a voice command, you know, like ya do, and then once you get in there voice commands go away? They just updated their Netflix client, but they couldn't be fucked to add support for their crucial robotic oculator? Weird, weird, weird.

You'd think from all this that I didn't like it, which isn't actually true. It was probably worth the price to see Brenna's face grow increasingly more horrified as I grabbed an episode of a show without a remote, paused it with my voice when I left, and resumed it the same way. It's a very scary device, which makes the timidity of the launch offerings frankly depressing.  I hope we'll end up very surprised by Kinect, a thing/method/philosophy that is still very much in progress.  I hope it'll arrive at a place where we can laud its virtues without the need to append quite so many asterisks.

i'll be a hole