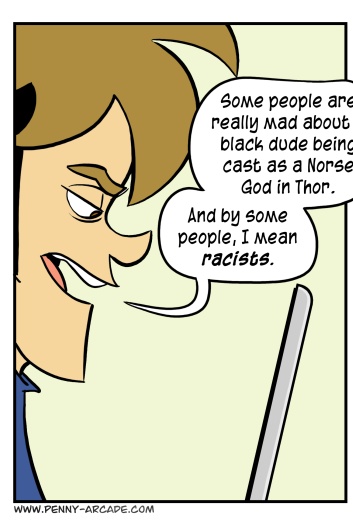 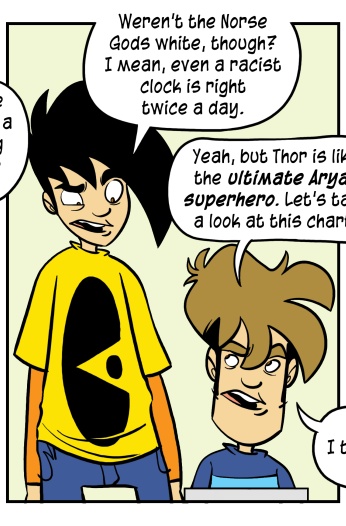 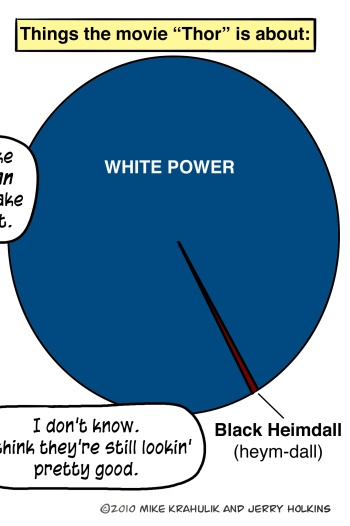 There is a pretty awesome article over at Comics Alliance about some of the casting in Thor, specifically the black casting, because blackity black black. We have made a comic on the topic, and Vantage Point Productions busted their asses to put together a bonus episode of The 4th Panel to accompany it.

Generally speaking, I like to whine about things; feel free to peruse the archive. At the end of the day, though, even if it means making a fondue pot Megatron, the right to create and interpret culture, even "low" culture, essentially forms the core tenet of my godless heathen religion. We need the freedom (and must allow others the freedom) to dismantle our culture so that we can actually look at it. The idea that anything is so perfect it can't be examined - even the, um, extraterrestrial technopantheon of Thor - is the enemy of human progress. Sorry! It's true.

A bunch of life is happening all at once, and it must be catalogued:

- I had a chance to see TRON: Legacy last night, and see it appropriately, at the Pacific Science Center's massive IMAXy filmic chamber. There are several movies here, all of them playing simultaneously on a single screen for some reason, and they're executed at varying levels of sophistication. But you really can have any movie you want to, sitting in that chair, and I travelled through several unique polarities myself. You can be the cultural exemplar, enemy of nostalgia - you can resist its entreaties at every turn, swirl your cape, and not be moved. You can absorb it through every pore, becoming young thereby. You can marvel at some of the cool coats. You really can't lose; at every conceivable juncture, you emerge the victor.

- Child's Play is barreling forward, and trees are growing in its wake. 1.43 million dollars is a lot, and I'm not just saying that because, you know, big number. I'm saying that because it's how much you people put in a pile and then shipped worldwide, in the form of joy, to salve the suffering of young people. That's something you did, and are doing. It hasn't stopped yet: I laid off the site while it was being launched as a professional courtesy, but the Humble Indie Bundle is back for Round 2, and Child's Play is one of the charities you can choose, which was very nice of them.