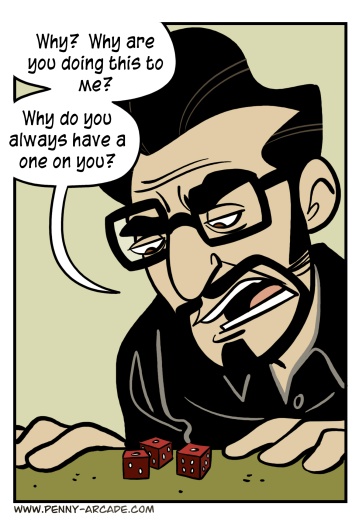 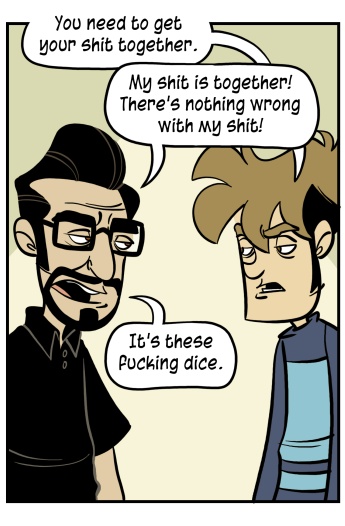 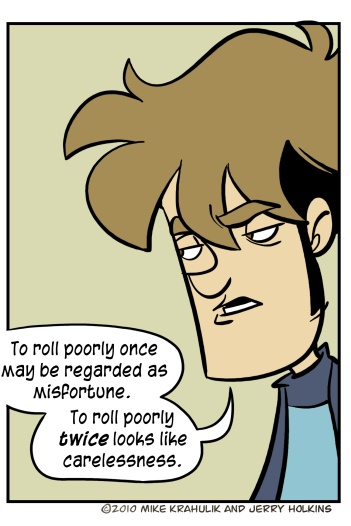 Monday night has morphed into some runaway Guy's Night anachronism, but if living in the walled complex of this cliche means that I can (with the boundless well of enthusiasm unique to the zealot) wreck robots for hours and hours while absolutely abdicating my responsibilities as a husband and father then yes. I need something, anything, to stave off the black ball of fear in my gut re: annual prostate exams.

Kiko (featured in today's comic, and the show, and who created virtually every shirt we have) played a round that ties into the roleplaying campaign, and determines crucial plotlines when Mondays are converted next week into an ongoing adventure. His objective was to destroy a town, and he was certainly equipped to do so. Just as an index, he brought:

- An Anti-Tank cannon on a tripod

- This fucking thing, and

He really did have a witch, that was not for your amusement. He had some steampunk take on Baba fucking Yaga, creeping around the treeline with some ten foot tall chickenoid contraption from which clouds of starving ravens were constantly erupting. Its very exhaust was dark birds, with clever eyes and cracked beaks. I don't know; on paper, that looks basically like a win.

He proceeded to roll far, far less than the statistical average on virtually every upward-facing aspect of the die, so much so that it passed beyond being humorous and (coupled with the howling winds outside) came to be seen as evidence of some spiritual deficiency on his part.  Then, it got humorous again, with the help of a hundred and fifteen year-old play by Oscar Wilde.

Longtime readers of the site have seen what Child's Play is capable of, its very nearly ridiculous growth, and its role as a focusing crystal for the charitable impulse. All of this is starting to require more personnel, which means that we have another job opening. I don't know that it's on the listing proper, but obviously: Table Tennis skills are a plus.

i wish it was alliday every old day