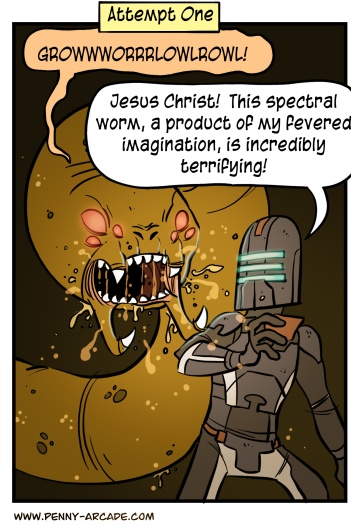 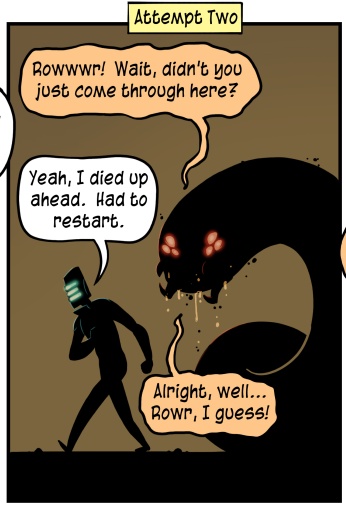 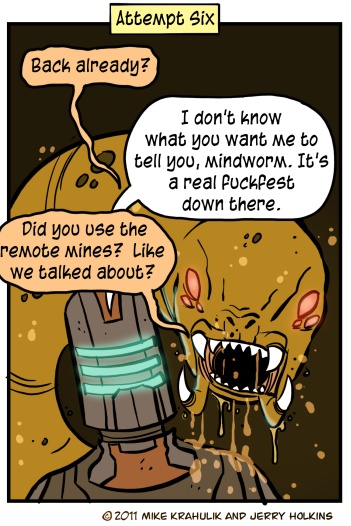 We've got Dead Space 2 more or less in the bag, now, practically sewn up, and it's just... solid. It's more of a compliment than it sounds. They've created a very "firm" universe, studded with meaty bolts and secured by cascades of regularly spaced hermetic seals. It has intimacy and scale; along with breakneck pace, from which no neck is safe. Eventually we had to start running, altogether, just as we did years ago in games like Alone in the Dark or Resident Evil. Obviously, this would have been before the latter game became about mowing down fifty zombies at a time with a man-portable minigun.

There was a part very near the end of the game that reminded me very, very strongly of another Electronic Arts title, this time from 1989, called Project Firestart. I will give you a moment to amuse yourself at my expense - at my advanced age, and at my diminished vigor - but when this phase is complete, I will assert (as I have so many times) that more than twenty years ago Dynamix delivered the Survival Horror template in its entirety.

I like DLC generally speaking, though I rarely seem to actually purchase it. I think I like the idea more than its case-to-case execution, the more-notion it represents, and perhaps also the couch-ness of its acquisition. The last DLC I purchased was Battlefield: Bad Company 2 Vietnam, because I heard it was good (it was) and because it seemed like a way to launch a full game somewhat through the backdoor, something I wanted to blip on their quarterly report. But what they've got up for Dead Space - thoroughly optional armor and weapon bundles - borders on the bizarre. The game already has suits out the ass. It even unlocks more armor in another fucking game. This isn't "must see DLC." This is like getting a tiny fork for your fork, so that it too may have a fork.

I often lament the fact that downloadable content rarely expands the story, though, and in a novel twist, an upcoming pack does exactly that: offering up some closure for the crew in Dead Space: Extraction, the lightgun shooter for the Wii and Playstation 3 which was much better than it had any right being. It is coming out... at some point, unless you're playing it on the PC, in which case the "novel twist" is that of a knife between the fourth and fifth vertebrae.

Oh! We made another comic about Dead Space.  I could've mentioned that farther up, maybe.

now i know it