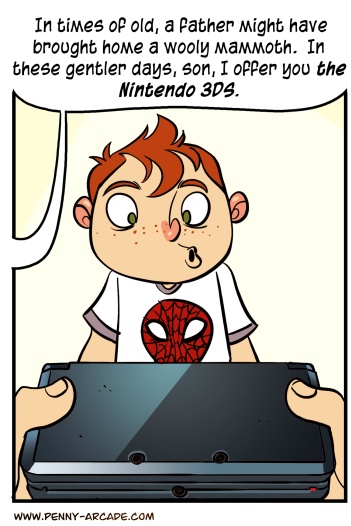 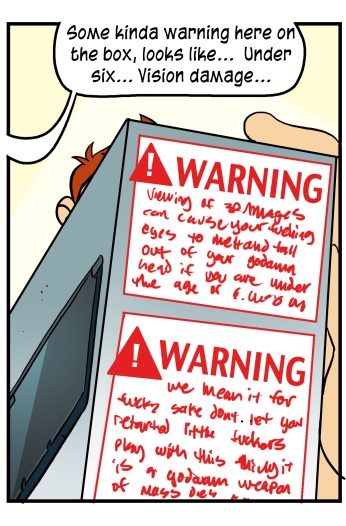 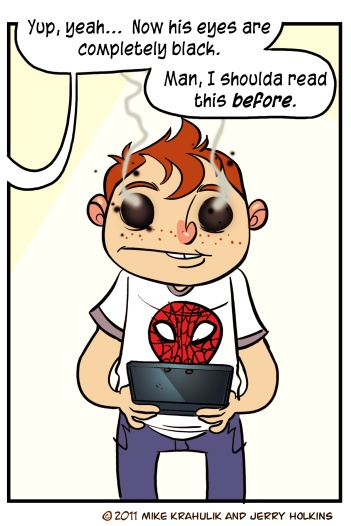 The side of the 3DS box really does have a frightening harangue on it. I would go so far as to say that it stops just shy of being Dark Prophecy, roosting tastefully near Omen.

The DS, I may say with clarity, is my Favorite System Of All Time. I'm referring explicitly to gaming appliances, it should be said; the sort of device I would type something like this on isn't in that continuum. Things did not start out that way: I begrudged the ill-starred thing its flip-flop nonsense, did not truck with its shim-sham, refused to hold court with its brazen and seemingly vestigial genetic trash. Remember the little "thumb nub" they offered for use in Super Mario 64? It was a bizarre age. Somewhere in that matrix of function first and third parties established an identity for the platform, leveraging the capabilities they needed out of the superset in a way that made the device seem to conform to the application. It was, in a word, wow.  Continues to be so.

It was my favorite system of all time even before I had a son with the accrued development to use it, and when you see a young person at its tiny helm you get a wider lens on its genius. I credit Super Scribblenauts with the entirety of his keyboarding knowledge, a substantial portion of his spelling acumen, and a measurable quantity of his bizarre behavior. I know, for example, that when he pokes his finger into the nothing in the upper left corner of his visual field, he is selecting a definition tool which does not exist in the real world. And when he proceeds to define every object within a certain radius, I think, well, at least he knows where the T key is.

With the flip of a switch, you can - and this is fascinating - remove 3D from the new device altogether, transforming it into something which is less 3DS and is more DS2. It's an analog switch, though, which allowed us to find the exact point where Gabe was able to see the stuff, like, coming right out of the screen. He says it's "pretty cool"!

You can imagine our surprise when Gabriel the Younger reached up and turned off the 3D after about fifteen minutes. Days have passed, and he has yet to turn it back on. He thinks it's neat that you can take 3D pictures, at least, as an idea. The pictures on the device are the ones Gabriel the Elder took in an attempt to show his heir that this was a cool thing to do.

You see time and time again the suggestion that people are turning this feature off, or that its battery lacks vigor. Excellent, exclusive software that feels native has a way of making you okay with things like this, but the DS had four distinct refreshes over the course of its life, and I wonder to what extent those nettling concerns can be assuaged by the passage of time.