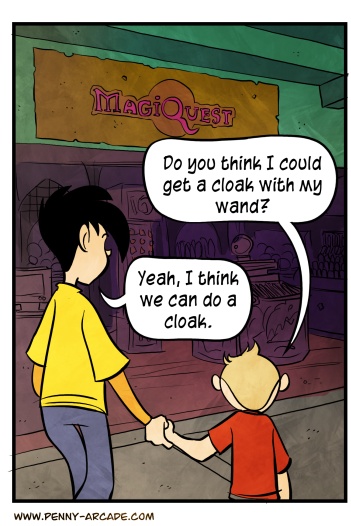 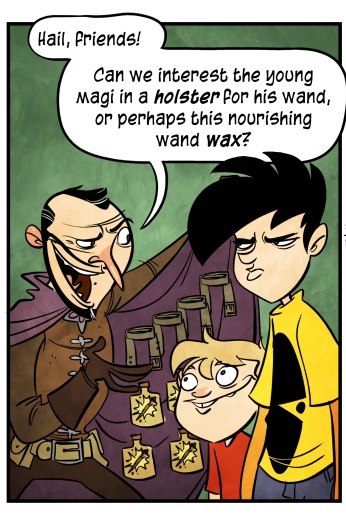 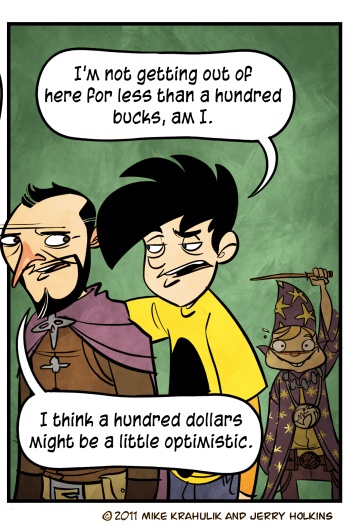 Gabriel just returned from something called a "Great Wolf Lodge," which sounds like a half-way house for troubled young lycanthropes. But it's not! And apparently there are many things there, things both wolven and lodgy, but the big takeaway is apparently MagiQuest which is like if they had RFID at Hogwarts.

If you want to play it correctly, and that's obviously what we should be shooting for as a free people, you can apparently run up a pretty good tab. Correctly in this case means a cloak. For starters.

Dragon Age II is firmly, deeply situated "in the bag" at this point, completion time thirty six hours or so, and the experience has been completely bizarre. As the resident Lore Hound, and indeed, for any person who knows what a Thedas is, there is a substantial quantity of aged narrative beef present. Cultural stuff barely hinted at by Origins' inclusion of Sten takes center stage, bolstered by ecstatic writing (that's ecstatic, definition 2) that has an entire alien culture as its payload.

I don't know how successful the original Dragon Age was, but given its interminable development cycle "success" as humans perceive this phenomenon may not have been possible. I don't think the climate at EA allows for that kind of build anymore, I don't think even BioWare can get away with something like that when it isn't attached to an ongoing payment structure. Something had to give, somewhere, and it's not hard to see where.

RPG as a genre is practically a sauce, now: it's something you stew other genres in, imparting an addictive progression arc in terms of equipment or capability. Mass Effect couldn't be a more perfect example. But the flavor was too strong, they determined, too piquant, and ME2 was the result. Most people seemed to prefer the taste. The thing that people are never trying to impart from the conception of an RPG is micro-managerial combat. I say this as someone who likes that and would start a foundation to preserve it.  That's what Dragon Age is about, essentially.  They have a challenge ahead of them; generally speaking, people don't make games like this anymore, not at this tier of development, and there is a reason.

We have expectations about what an RPG is that are deeply, deeply at odds with the way the industry currently works. It is our expectation that we will purchase a forty hour game, or a sixty hour game, or a hundred hour game for the same price that we purchase a game that lasts four to six hours. BioWare has tried to chart a course for the franchise that is remotely fucking possible in the current environment. They're up to their elbows in some pretty sacred zones, and the result has been confusion and rage.  It's full of experiments, though, some brilliant and some less so, but I'm wired to think of even failed experiments as progress.

The way these games are "supposed" to go, expressed both by ancient CRPGs and the more modern Mass Effect series, is that you follow a single character's journey through multiple discrete chapters. Dragon Age II confounds this in what I think is an interesting way: they are not telling the story of an individual person, or even a group of people. You would get the impression from DA that this was a game about "The Grey Wardens" and "The Blight," the way that ME is about "The Spectres" and "The Reapers," but you don't have to play that game long to understand that it isn't entirely true. It's actually a story about the people and the power structures of a particular time. Dragon Age II cements that these games are about the world itself: yes, it remembers your old character, and the effect you had, but not just in a localized way: your effect on the motion of history.

Do people like that as well? Generally speaking, I would say no; it's a pretty high concept play. They chose a very peculiar moment to focus on, here: something that would have been a cross-media piece, or an animated short, or a tie-in anywhere else gets the front page. I will tell you that it will be fascinating, beyond fascinating, to see how this tumult crystallizes into the DLC. They have been "given" an incredible, nearly unprecedented opportunity.

To complete the Friday ritual, we've got new Penny Arcade Television, centered exclusively on doing mean things to one another.

i'm all grown up this time 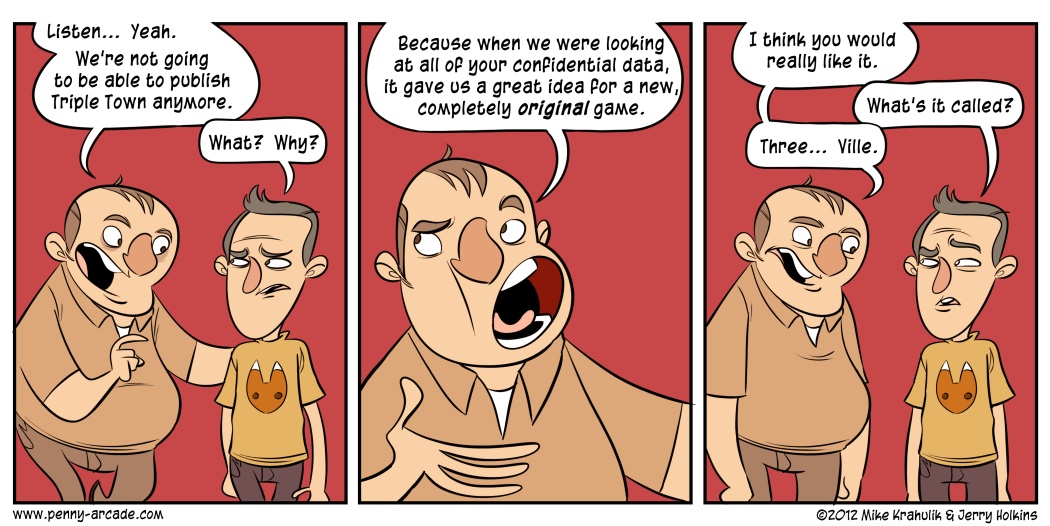