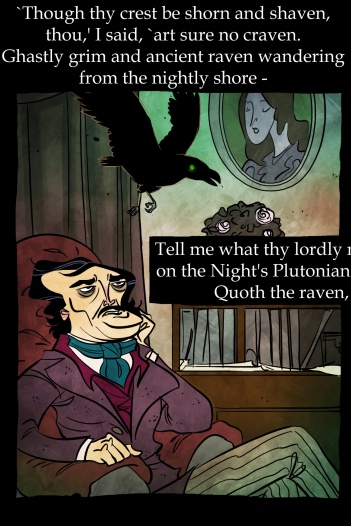 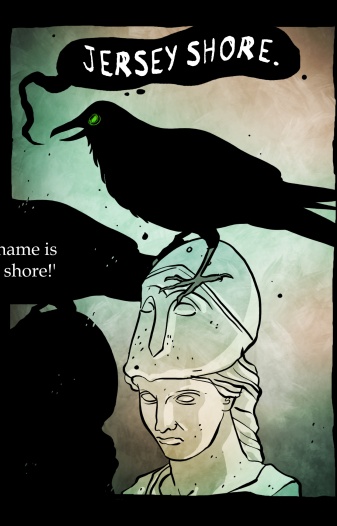 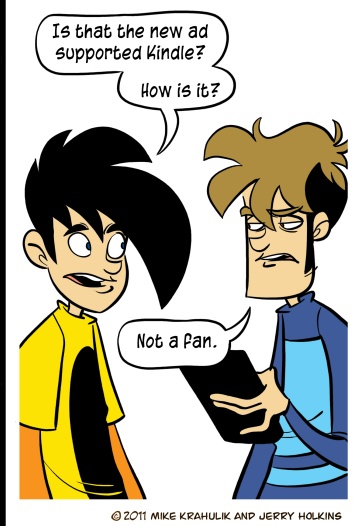 There is a new Kindle in town, the "Kindle With Special Offers," which I would definitely have named something else.

I might also have priced it something else, but if they'd made the thing an even hundred bucks no-one would buy any of the other ones. Advertisements roil beneath the surface of your purchased books, ready to leap the moment it's put into sleep mode, or (in a dark mirror of our own universe) to sidle in unwanted when absorbing your gothic horror.

Gabriel will occasionally surprise you, and not just with his unhinged, borderline carnivorous ability to discern human weakness. For example, I'd forgotten that he had committed the entirety of Poe's The Raven to memory, which he quothed throughout the process of writing the strip. I asked him if he'd ever read The Gold-Bug, an adventure story which is about cryptography as much as it is anything else, and he said no. I can remember reading it on the bus home in high school, and being so utterly transported by the text that I missed my stop.

It was cool, though; I didn't mind.

I can read books and enjoy them now, certainly; I still have whatever organ is responsible for secreting joy. But that was a very strange time, just after I had failed AP English, where for some reason everything I read was hopping an inch or two off the page. I honestly couldn't stand that class.  If we already knew everything there was to know about Ulysses, then why were we all sitting there, dutifully pretending to read it?  I began turning in all my papers in iambic pentameter, at least, the ones I deigned to do at all. I can remember the final very clearly: the teacher was passing the tests out, going over his expectations, and he passed my desk without giving me one. Being refused the opportunity to fail the test communicated the full extent of my dereliction.

I'm mentioning it not because I think you should fail your classes and tell your teachers to fuck off in a syllabically constrained fashion.  But I failed, miserably, and did not die.  Quite the opposite, in fact.

This is good information.

My first and only F well in hand, the illusion I had of myself - that of a pristine jarred brain casting aspersions on greasy, cavorting bipeds - was obliterated. I was enrolled, then, in a series of what were (and may still be called) "bonehead" classes, which were apparently where they hoarded all the Twain. And I Am The Cheese, and Watership Down, books that played with modern language and perspective and voice, and played rough.  There's really no doubt that my entire life turned on that point, and it never really stopped turning: the point at which Writing became decoupled from English.