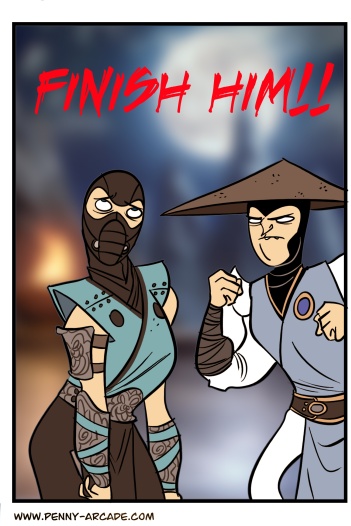 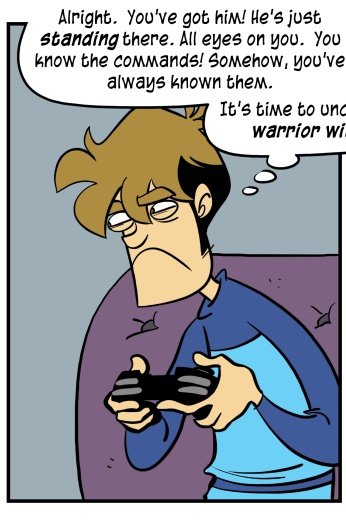 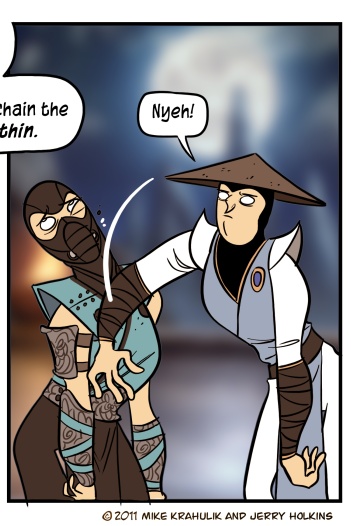 Robert considers Mortal Kombat his "game," in the way that some might consider Empire State Of Mind their "jam." He's been busy repairing the business we are perpetually trying to destroy, so he hasn't had a chance to come in and see it. I'm not an expert, like some people; we tend to play the fighters of the mysterious East, though this is at least partially because those are the fighters which exist.

Being able to perform a Fatality (or, indeed, any -ality) was akin to Alchemy in the arcades and pizza parlors of my youth, I've never really been able to muster it; the new one lets you go right into the menu and look at the commands, with your eyes, which communicate the needed inputs to your brain, and I am still unable to do so.

After a marathon session yesterday, a friend of mine (on the PS3) and I (mounted on my brutal Fear Engine) wrapped up the co-operative portion of Portal 2. We managed to break the tutorial in about seven minutes, generating an intractable scenario that required us to start again, but whaddya do. Ultimately, we gave up on the cross-platform voice chat as well. It's one thing if you both have the same shit, and can compare notes; solving computer problems is a kind of game, and I don't mind playing it. I didn't really know where to start on this one though, and I didn't particularly want to, because Portal 2 was out and I wanted to play that instead. I made a Party on Xbox Live and we just used that, partially because it would be quick, and partly so we could incorporate yet another platform.

I'll have the single player portion wrapped up today or tomorrow, and it's been very good. But the "sequel" is here, playing with a friend, puncturing reality with your quantum space holes. This is the progression of the idea, in the same way that Splinter Cell became somehow even more of itself when the second active consciousness was allowed in.

The machines you play as are some of the most realized "digital actors" yet attempted, something they must know, and they naturally generate affection; that these creatures are then given mind-bending tasks to succeed at only compounds their "humanity." I don't know that I've ever been as impressed by animation as I am here. These two aren't done.

After we wrapped it up, I went back to the single player campaign, and found myself struggling against it. There was no-one else there with me, and no robots, and I only had two portals. In my father's day, they had no portals, and they were happy. Just think.  Two portals used to be a lot! More than enough, really.

that's what i'm counting on