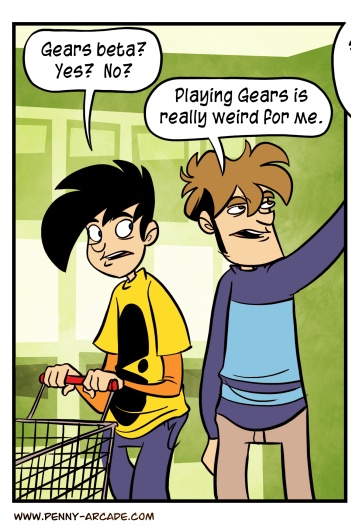 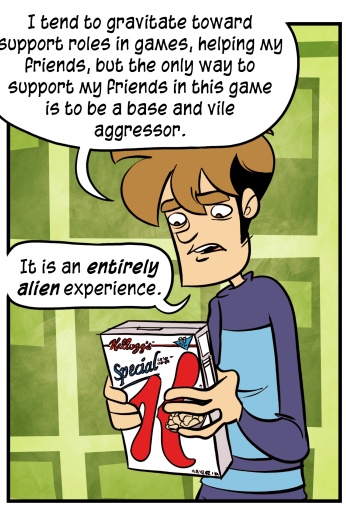 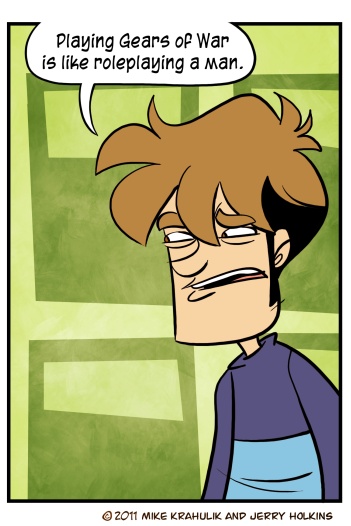 If you played Bulletstorm, specifically on the 360, you have probably checked out Gears of War already. I'm fairly critical of Gears precisely because I do love it, and want it to be better, so that people will see what I do. Ultimately, this will have the side effect of making me feel less crazy.  It's a long-term play.

The playercount in Gears was eight, which they bumped to ten for the sequel, which means there’s no systemic tolerance for nonperformance. I’ve taken great care to surround myself with competents, and when I play games with them, they perform in the capacity they were selected for: they keen and gnash and slay. Gabriel is a threat at medium and close range. Robert governs the field. Kiko is an incredibly savvy duelist. I’ve described my role generally as a Force Multiplier, and it works.

My rules don’t work in Gears, the ones I’ve crafted and subsequently distilled, the ones which allow me to succeed vicariously without commitment. There aren’t enough players for me to remain ballast. What this means is that I must fight, every second, against all foes, always. It reveals the extent to which I’ve chosen the role of observer even in an ostensibly interactive medium.

There are other games with low playercounts, but they generally don’t place as much weight on individual spawns: Team Deathmatch in Gears has a total of twenty lives per team, and I still feel the sensation, but the modes I tend to favor are all single spawn in the mode of Counter-Strike. Couple this with the often terrifying and punitive Cobra Kai hazing that goes on with its executions and I’m always in situations that I would prefer to avoid.

The urge to serve my friends is still there, underneath all that, but in this context the modality of that service must change. The only way to help them is to be a scything angel of death grinding men and women in a perpetual blood harvest. Quite simply, it’s not the boy my mother raised.

He's in there, though, somewhere, all the same; this ill used creature, its tongue basting the iron bars, dreaming its dreams of slaughter.