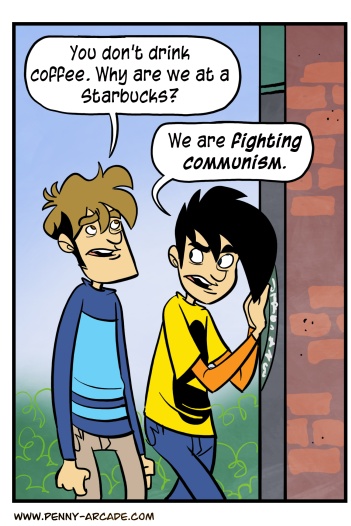 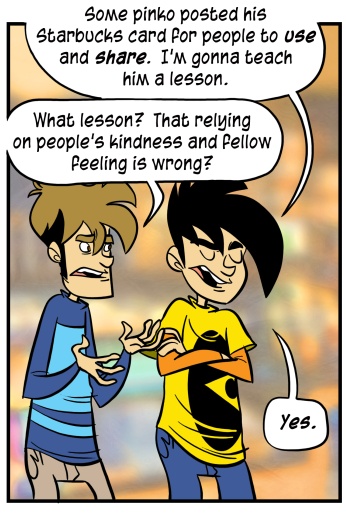 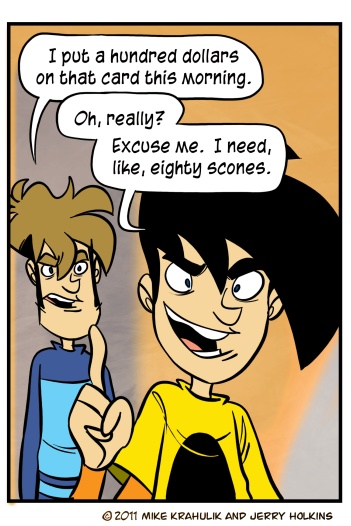 I love this kind of stuff.

For those of you not familiar with the story, “a dude made an image of his electronic Starbucks Card available for anyone to download and use. And use it they did! Which is to say that they used it straight into the fucking ground. Until they started recharging it, and using it down to zero, and recharging it in an echo of an extant human tradition until the coffee card came to represent the eternal push-pull of yin and yang.”

He denies that this is part of an elaborate social medioid hyperblitz, but if it works, I don’t really think it matters very much. If it wasn’t a machination in this particular case, it certainly will be in the future. And we got a strip out of it, so I can’t feel too bad. Implementing a Caffe sospeso policy chain-wide might see some advantages, in addition to being an objective good, but as a profit center a single card doesn’t really seem like a winner strategy for anything but brand awareness. Most people have heard of Starbucks.

Starbucks is a thing.

I tried it myself, and there was enough left on the card to make a four dollar and twenty cent coffee a mere ninety cents, which I suggested to Gabriel made the card something like a coupon. He countered that it was more like gambling, and I had to admit that this was probably a more robust descriptor. The reality, of course, is that since I’d added a hundred dollars earlier that very morning, I got a single Venti Mocha for ninety-nine dollars, which (even given their typically extortionate rates) doesn’t constitute an incredible deal.