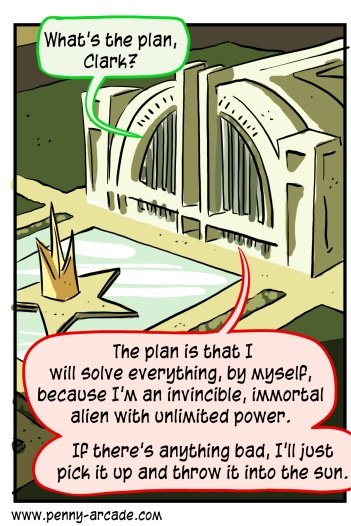 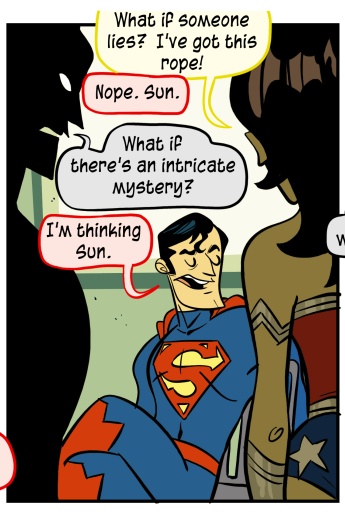 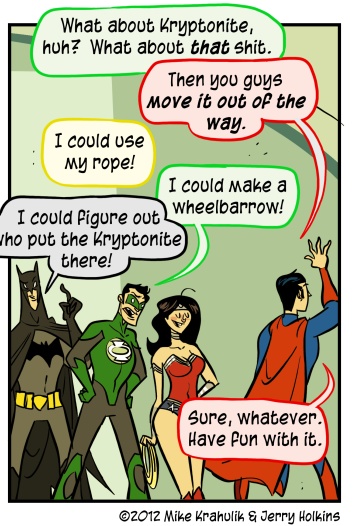 Scott was telling us about The New 52, which I understand is a new kind of... fifty two. I'm not an expert on this kind of stuff, so I had to rely on a vast preponderance of unnamed others. I am not known for my textured and incisive knowledge on any subject. I am known primarily for

a) my word collection, and
b) my propensity to show you them.

The short version is that DC Comics (that is to say, Warner Bros.) burned their continuity to the ground and started over at Issue One. It's possible that you know about comics the same way I do, that is, when your Comic Friend tells you to read one. The most salient point for those outside the continuum of enthusiasm is that they have begun shipping digital versions of the comics day and date with their printed counterparts. This would be an incredible opportunity to deliver precision kicks: for example, I could make a reference to what year they should have started doing it, and then casually append what year we are in now. But why? They could have gone free at the same time, and maybe they should have, but hey - baby steps. Let's all pretend to be real surprised next year.

Even when Gabriel was a regular reader of comics he wasn't a "DC" man, and I've already told you my own discovery method, which is to let others discover them. So there's a lot about the Justice League that we don't or can't understand. I'm certain there are explanations for all of this stuff, like dark neutrinos, or the Star Polyp. But I got shit to do.

Things are still things dancing inside my head from PAX, dangling in a meta-child's non-linear chrono-mobile. In the farthest corner of the main Exhibition Hall, I saw two things you might be interested in: Closure, which was recently picked up by Sony for distribution on the PSN, and Path of Exile, pour les ordinateurs. I had a chance to check out Closure before there was any booth to speak of, just a table with a single laptop facing the interior of the booth. I played it until I saw the fullness of the gameplay arc folding itself around me, and became intimidated by the young men showing it to me retroactively. It was too smart, and it was getting smarter by the minute, and I had to get out of there before I hit a level that would confound me absolutely. Probably best just to show you a video, and leave you with some extra credit.

Path of Exile is Diablo; it would be disingenuous to say otherwise. We may distinguish it from Diablo by saying that it will be Free To Play, has a personal skill tree that resembles an infinite, madman's version of the Sphere Grid, and item-bound skills that recall the Materia System. It's a completely independent labor of love that has already been five years in development; if you think Diablo has gone casual, or watercolor, or any of the other complaints one sometimes sees, I know some people who would love to speak with you.