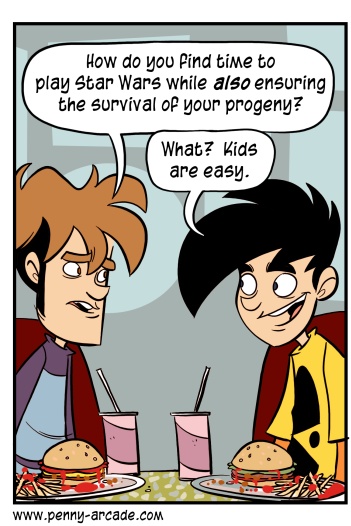 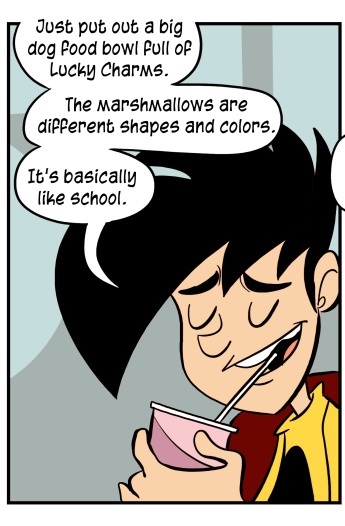 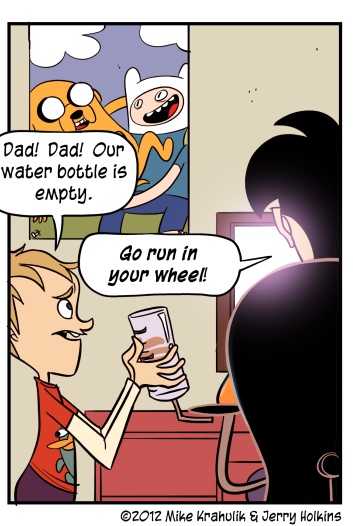 When you put it like that - pitting the accrual of illusory accomplishments against the nurture of a being you have produced - it seems pretty crass. I'm sure it seems especially crass to people whose homes aren't infested with these larvae, who may still luxuriate in the luminous ideal of parenting as opposed to its immutable truths, which invariably involve shit and vomit.

The solution I'm drawn to most requires another computer, and the passage of ten years or so, but is the most optimal; it involves being able to play these games together. Right now, my son entering the office involves a lot of incredibly quick turnings-off of the television or lightning-fast squeezes of the monitor power switch. An MMO would generally be pretty safe, relatively homogenous stuff, but Star Wars can be authentically disturbing. My first task is to make a boy who can withstand such things.

Robert sent me a mail entitled "Child's Play" which included the following in the body of the message:

There was little in the way of context, but I got the gist; there was also a short coda about how we're ever going to top that number, which is a fear I understand completely. I understand it because I felt the same way in 2003. And 2004. Also, 2010. If it were something that "we" were doing, maybe it would be impossible. But look at the events calendar: 2011 was more of a collaboration than any year before it, and the result was profound..

$3,512,345. What that means is that in the space of a single year, donations eclipsed the first five years of the charity combined. I don't really know how to contextualize that; it would be as though a loose association of individuals, bound by a shared interest, created a wholly organic charity network that defies every available trend and model.

Except it's not "like" that, it's precisely what happened.

there are no gods here