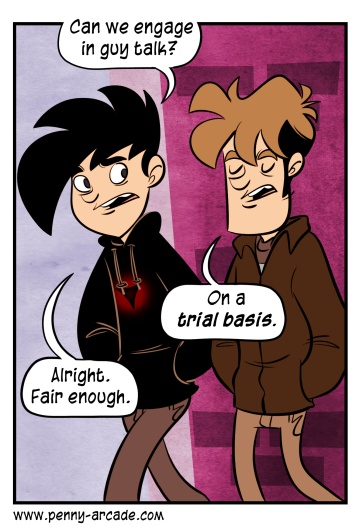 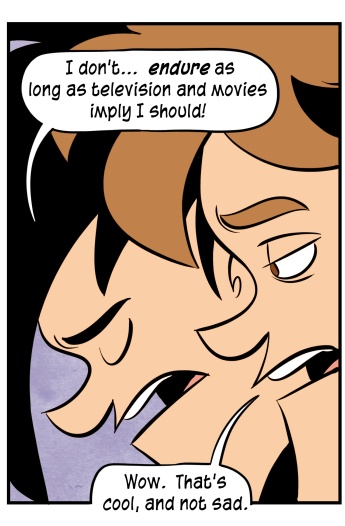 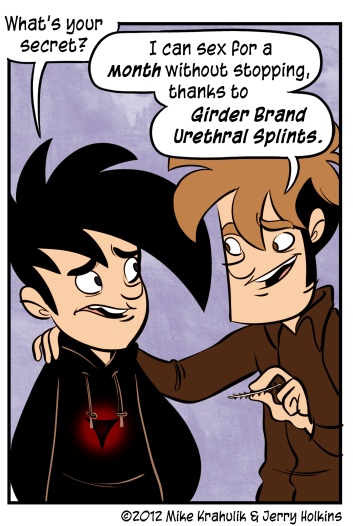 Here is today's strip, which I will get into momentarily, but I've just now realized that I could leave this graphic up and nine times out of ten it would probably be fine.

Writing The Trenches every week is a high point for me. I wasn't entirely certain that "opening our relationship" to incorporate a third conscious being would result in even a single strip being created. I was wrong, though. We've made tons.

Scott Kurtz thirsts for communion; his working modality is to engage in what Brenna would call "Stitch and Bitch." Gabriel and I talk about random shit when we are spinning up, but Scott wants to talk about actual things: relationships, boudoir proclivities. In other words: real talk. Two sessions ago, our Scott-directed dialogue necessitated diagrams from each of us in order to elucidate certain particulars. I went over to take a picture of it, so you could see, but his drawing is more or less photorealistic. Mine incorporated a devil mask, an altar, and a pitchfork, not to mention four mottled feet of brutal, almost scythe-like dong. Gabriel's depicted a fairly normal scenario of two people doin' it, which he seemed to think represented some radical new sexual technology.

Last time we entered the comic strip equivalent of "the hexagon," I revealed my endurance secret. Hence the strip.

Upon his completion of TOR's Esseles "Flashpoint," which a World of Warcraft player might call an "instance" even though there isn't really a direct analogy, Gabriel sent me a mail which read:

just as I had begun installing the game in question. Always one step ahead; that's how I maintain my stature as the preeminent person who, like... does things. I'm only level fourteen, so I don't really know anything. Maybe when you hit level fifteen, it starts to get real, real dumb. I will tell you something strange that happens though, and has never happened for me before anywhere in the genre; whenever I enter a tough room I always reach up to quicksave. That's weird, right? The game is filed mentally as "single player," despite all the evidence to the contrary.

That's quite a trick.