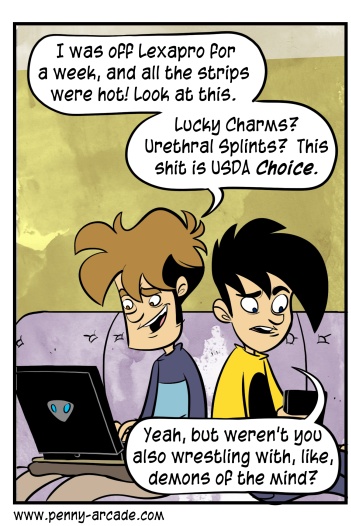 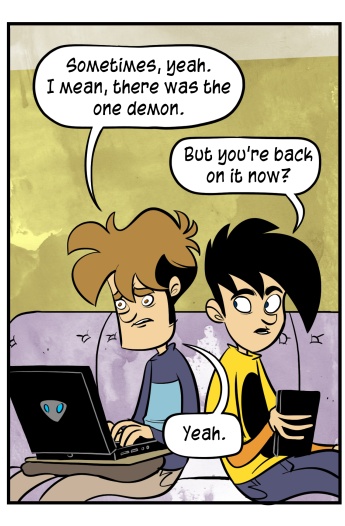 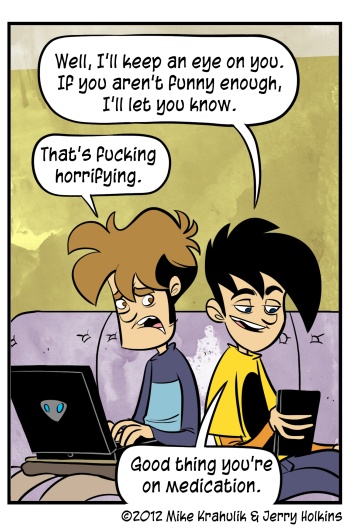 Occasionally, my health insurance will forget that they did at one point authorize an antidepressant, or they'll decide that I can have it, but that I can't have it every day for some reason. I will talk to a person on the phone about it, and what becomes clear almost immediately is that they are trying to make two numbers add up correctly and I am wondering... well, I don't want to say.

Gabriel's problems are different than mine. We take the same drug for different reasons, and I would never presume to speak for him. I know only the most rudimentary version of his experience because he can't talk about it, even now. That makes it sound exotic and exciting, like the baroque psychosexual furnace that might propel an international assassin. I doubt it's that exciting in practice; in fact, it's probably debilitating in some way. But that's how this idea is generally presented: madness as a supernatural power source, as opposed to a seemingly inviting bowl of oatmeal interspersed with occasional hot glass.

Even I buy into this idea, and I should fucking know better. But if this chemical is mediating my responses - if it's adjudicating stimuli in some way - is there something true about it? I don't know, actually. You can spend a lot of time thinking about it, though.

This is the part I do know; that the upper and lower extremes of the sine wave are lopped off. The crest feels like being converted cell by cell into living electricity, I mean it's literally incredible; it's almost worth the furrow, but not really, because it's a long, long way down and it's deeper every time I go. What medication represents for me as an organism is continued existence. What it means for me as somebody who makes things is more complicated: it normalizes my state, which is something else we could graph!

Whoever this is, they are apparently still obsessed with data visualizations. I must be in here, somewhere.