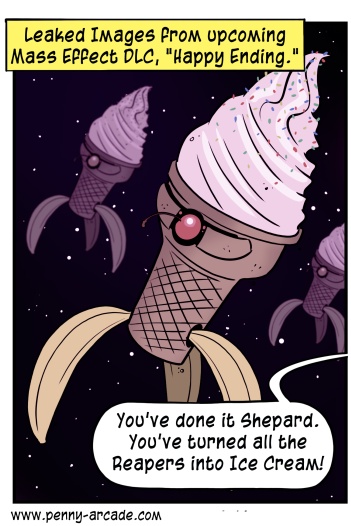 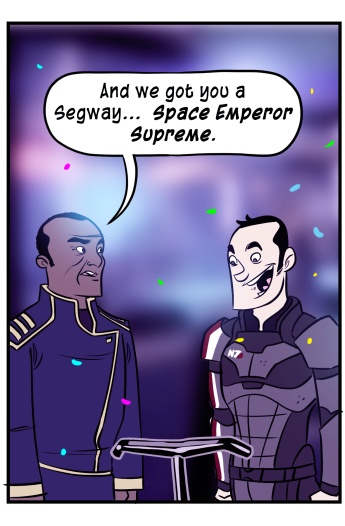 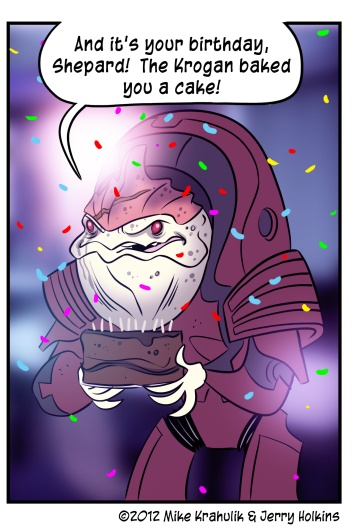 It occurred to us that, like the Council of Elrond, we had the power to unite the mortal races against a common foe. We could just make our own new ending everyone could rally around.

The official line has shifted from "our endings are invincible chocolate platinum" to "okay, let's talk about the endings later, after more people have finished it." Personally, I'm still hooked on the Indoctrination theory; I like creeping, gnawing ideas of this kind, ones that call the understood narrative into question. The first Force Unleashed did that especially well.

I've been in the habit of making things for public consumption so long now that a lot of the mystery that is bound up in Creative Endeavor evaporates. Patrick Rothfuss had me on as a "beta tester" for Wise Man's Fear, which I was more than happy to do: I wrote NO in thick black sharpie over entire pages, and I think I even shook my fist at one point at an impotent God. I don't know how the book turned out because I never read the "real" version, but this very act horrified Gabriel. He thinks of books as being Absolute Things, like Sandwiches, as opposed to something that vibrates or shifts in any particular. I didn't find it particularly weird, but you come into this stuff with a lot of your own shit. Perspective is, to him, more or less inviolate. That's something I get.

When it comes to Mass Effect 3, certainly they have the "right" however vaguely enumerated to make what they want, and those who consume it have the "right" however vaguely enumerated to say that what they have done is wrong/bullshit/authentically evil. These "rights" don't necessarily overlap: they exist as perfect spheres, bouncing off one another in space. Creating or critiquing is just a way to pass the time until you die. I won't say ne'er the twain shall meet, but they might not, and they don't have to.

Ownership is a very complicated business when it comes to cultural product, though. They succeed by virtue of the fact that we, as players, incorporate these stories into our lives. I've always wondered what the conflux of digital goods, interactive storytelling, algorithmic content creation, and democratized funding mean for an idea like authorship. I think we're beginning to find out. 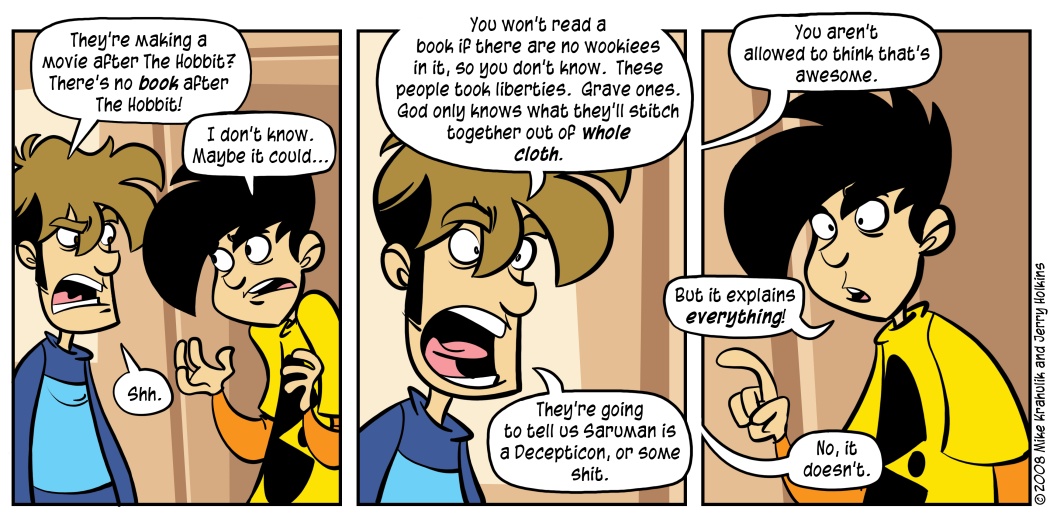