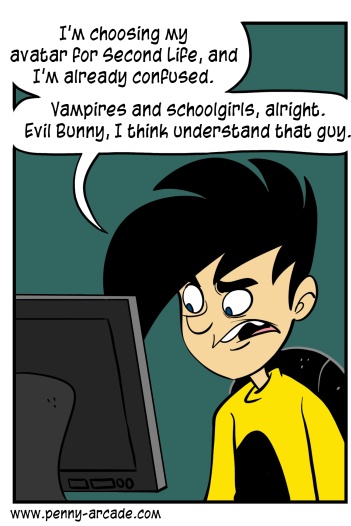 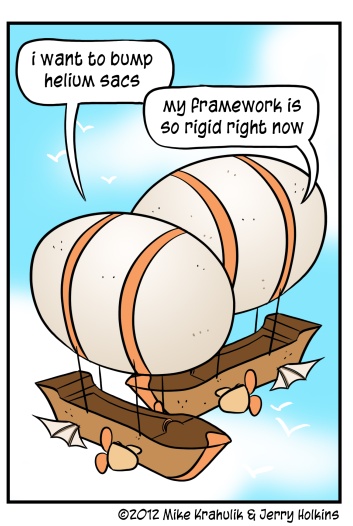 We both watched Life 2.0 at different times in the same week, more than a year past when we had meant to see it, because of time and its, like, inelasticity or whatever. I never got around to seeing this film just like I never got around to playing Second Life, the "game" its based on. These are only two examples of things I always meant to do, but did not; I could go on.

I'd be surprised if Second Life regulars were huge fans of Life 2.0. The director here is no fabulist, but he chose his subjects, as was his right. It's like The Dungeon Masters, which is also an incredible film, or Darkon, or (and this is rapidly becoming clear as I think about it) almost any subculture documentary. The camera tends to be situated outside.

It did inspire a jaunt into Second Life proper though, the first several minutes of which are catalogued here.

Something I neglected to mention during Monday's Paean to the Freemium was how quickly these games can change - sometimes, the first change is, itself, to adopt a free to play model. I keep thinking about velociraptors: not just because they're so great, but because this pack of frenzied beasts must necessarily destroy entrenched games. Not individually, no, but as a function of their aggregating bitings.

These games are even more desperately data driven than normal: they are never "complete" in the way a traditional game can be, and their costs are ongoing. This means they might change tack in interesting ways - one of the things that made my trip back into Spiral Knights so sticky.

The basic loop back when I started playing was that you went down into the Clockworks dungeon area, hauled up sacks of money, items, and recipes, dropped off crystals to build more dungeons, rinse/repeat. It's a fun loop because the game itself is fun to play: it feels like a Sega Genesis game which has somehow leapt through time. Even so, it lacked the standard treadmill which (while not necessarily fun inherently) signifies the persistence and progress people like in this kind of environment.

Imagine my surprise when, having come back on a lark, they've added an entire rank and mission structure that sits on top of the game I knew, suspended in a light narrative syrup. These are a sequence of dungeon delves in miniature, bite size, and what this week has indicated is that I always have time for one or two. Which was clearly the purpose; now, I find myself lusting after those rewards found in the clanking guts of the more freeform areas.

I own many games, and I strongly suspect that if I were to put an older game of mine back in it would not have been radically altered in the intervening period, let alone altered for the better. Then again, I suspect it also wouldn't ask me to input credit card information. I could play it for as long as the hardware held out and it would never reach for my wallet. So, you know.