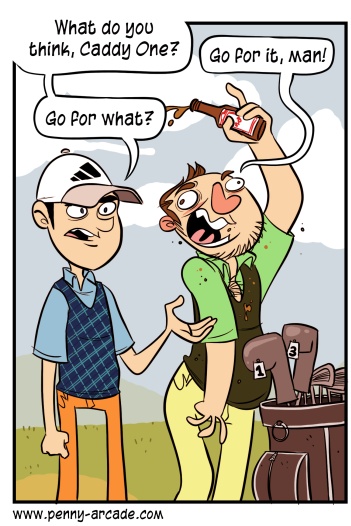 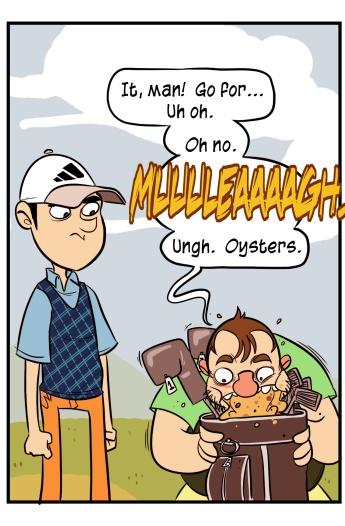 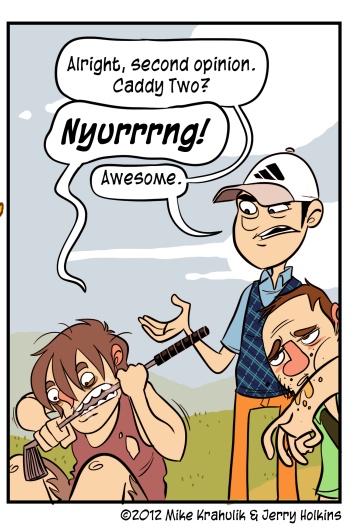 We've had such terrible experiences in one way or another with so many iterations of EA's Tiger Woods franchise that they've probably scared me off permanently. I was one of the annual purchasers who felt the shock of their next-gen transition, the one that decimated the course roster, but choked it down; it wasn't until it became clear that their mechanism for multiplayer matching and gameplay simply didn't work that I gave up.

Gabriel likes golf much more than I do - he actually likes Golf, capital g, as opposed to Eating Snacks From The Snack Cart (which is the game I like) or Driving The Carts Inappropriately (another favorite). I enjoy golf games, for the reasons I've delineated previously: there are very, very few inputs in a game like this, which suffuses each one of them with tremendous import. But I play them for the same reason I accompany my friends on an actual course. It is a primarily social engagement. So if that part if your game doesn't work, for me, the game evaporates.

No so for my compatriot, because the game being simulated is still golf. And it's especially Golfy this time around, by which I mean that it takes its cues from the sport itself from a feature perspective. Gabriel is especially pleased with the new (ahem) "stroke," which consists of a single, beautiful, DaVinci-style arc informed by human mechanics and no other bullshit. Where they've really gotten hold of him is with their Country Clubs, which in any other game would be called a clan. He's creating daily and weekly tournaments, they're levelling the club in a cooperative way, and they earn bonuses individually from the structure. The developer experimented with Social Challenges previously, I don't know if that was ever a thing, but this new methodology is both incredibly powerful and fits the setting.

He's already suggested that the Kinect portion of the Xbox offering isn't going to set the world ablaze, but he did mention a couple novel interactions; you shield your eyes to look out over the course, and you crouch down to read a green. They make you choose a control scheme ahead of time, which means you can't mix and match. Functionally, that means he will never use it, when he might have leveraged a combination of gestures, voice, and pad given the opportunity. I hope these types of either/or manifestations are an artifact of this ancient hardware and not some bedrock philosophy.

You have two caddies that can make suggestions about clubs and shot placement, and the creatures they have on offer serve up surreal and terrifying advice. The first is raw, amoral id and the second is a paranoid schizophrenic, so the best shot is usually somewhere in the middle.

her arrow and her string