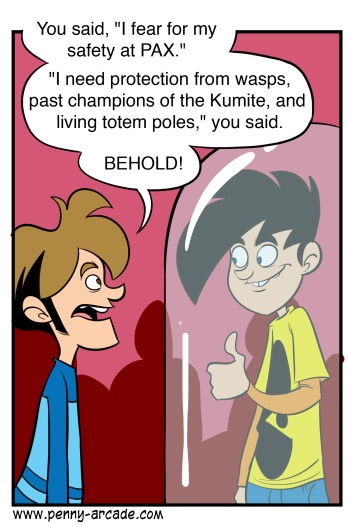 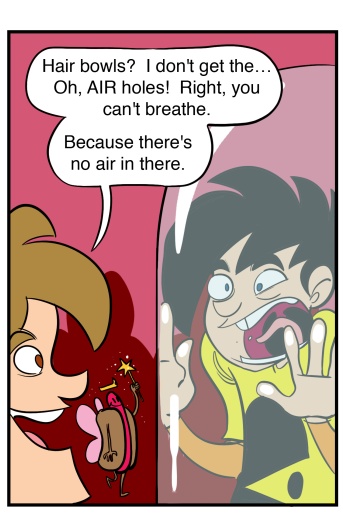 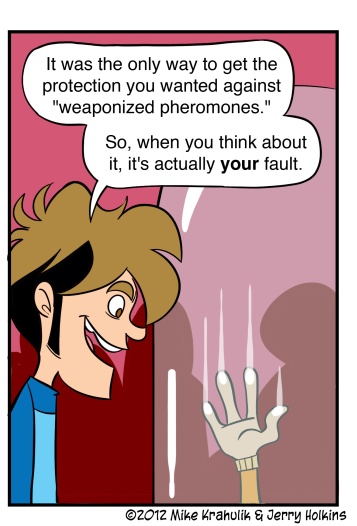 PAX dreams are incredibly weird.  The one I just emerged from proposed that Achievements existed somewhere in the actual world, and they were like edible clocks.  I can't really put that one together, but it's alright; this is that organ's job, to contextualize life in a mythic way.  If previous shows are any indication, this process is just beginning.

The strip from the Make A Strip panel is here offered for your amusement, with audience-derived modifications firmly installed.

The show has initiated its process of perpetual unfolding, and I'm trying to seize URLs as they pass by in an effort to catalog the last three days: Dyad, an incredibly restless combination of Rez and Tempest which is uncontent to stop there, is something I came back to multiple times. I actually ran a demo for people one time when the developer happened to be away, such was my investment.  He was right next to They Bleed Pixels, a wicked little gem of an action/platformer with a rock-solid theme and unrelenting gameplay.  And they were right next to Awesomenauts, a 3v3 take on the League of Legends/MOBA thing done entirely as a sidescroller.  I did not get it at first, and then five minutes later I did get it; that was when its tiny fangs punctured the skin.

I got "stuck" in that row once as the hall was closing on Saturday, and it was all too good.  For whatever reason, independent developers essentially took ownership of this show - they staked a claim out in the middle of the hall and took on all comers.  I have to emphasize that the three games I mentioned just happened to be by each other - I could do this all Goddamn day with the indies and the games.  I bought Bean's Quest, a take on an iOS platformer that actually works, the second I got back to my room.  I saw them because they were right next to Monaco, which is Monaco; you'd have to see it, but I've heard it called Pac-Man meets Ocean's 11 meets Hitman, which may be as good as we're gonna get.  Monaco was close to Skulls of the Shogun,  smooth turn-based strategy with a truly invincible theme, and if you were to leap from there to the next aisle, you would see Capy's "Super T.I.M.E. Force" which was a kind of barometer for some attendees:  if you'd seen Super T.I.M.E. Force, went the thinking, then you'd seen the Game of Show.

I've just described a tiny slice of a single part of PAX, and the weight of those aggregated memories is pounding me into the Earth.  Before I collapse, I want to thank the Enforcers, without whom the show could not exist, and the attendees, both for their attendance, and for making the Omegathon's final round - Crokinole, for God's sake, literally a piece of fucking wood - a true spectacle.