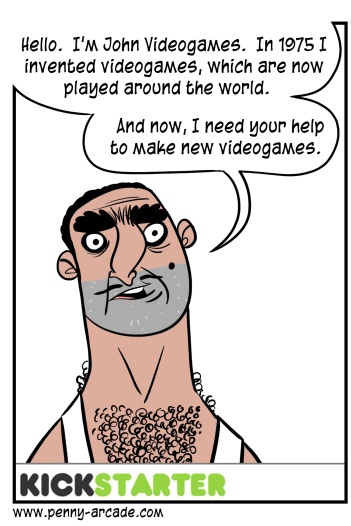 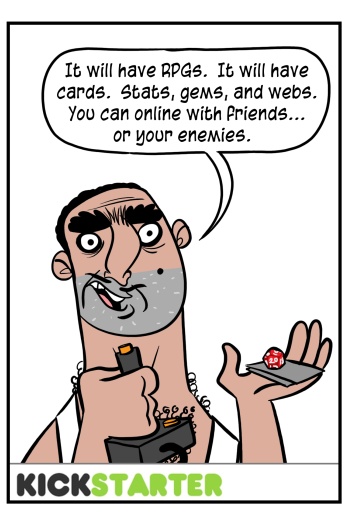 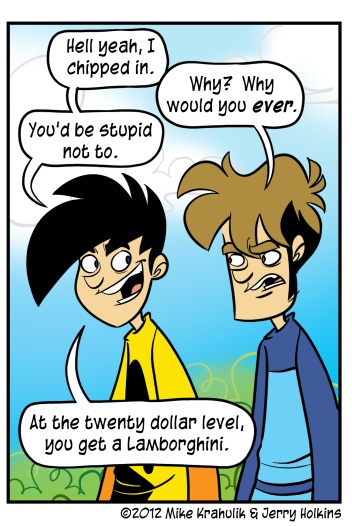 There is something we pay attention to here that you probably don't, but after I tell you, it's entirely possible that you'll play along: we like to the play "the preview game."

So, over on the right there, in the "latest comic" box, there's a graphical preview of the most recent strip. We generate that automatically - no person is ever selecting portions to crop. It is often perfect. Today's is an easy one, it's just one dude, but there are times when it grabs genuinely compelling, almost curatorial shots. There! Now you know.

There was a fairly high profile hoax/scam thing on Kickstarter for "Mythic: The Story Of Gods And Men" that was swiftly pulverized by community sleuthing. As suggested previously, one is - in many cases - funding the "idea" of a game, ideas being a quantity in ready supply. If they had been less stupid, less obvious in their ruse, they could have taken in their eighty thousand dollars and then promptly evaporated. We may expect the next villain to utilize a more sophisticated approach.

Despite not wanting to be the Kickfather, it seems like it keeps happening. Not every time I want it to, of course: it's not actually something I have control over. I can't make things succeed. But as a medium, as a rebroadcasting apparatus to the microcommunities that can bring something like this to fruition, my body will suffice.

It is my preference to link projects late in their "lives," after they've already succeeded, which implies a certain volume of crowdwisdom - this is an effort to minimize the incredible, almost historic potential I have to disseminate fraud. I directed you to Zombicide and Ogre specifically because their lavish attention to the "stretch goal," add-ons, and pledge structures seemed like technology others could leverage. These teams also represent considerable slabs of cultural beef: legends in each case, whose failure to perform would damage their existing businesses. For creators of sufficient lineage, Kickstarter is more blackmail than funding source. I feel that we can rely on that grim pressure.

Even so, these two projects have seen jumps that are virtually nonsensical; you're welcome to compare their numbers now to the ones in Wednesday's post. In a truly Meta level of commentary, the Zombicide team asked if they could do a Cardboard Tube Samurai stretch goal, and I said yeah, but what I didn't say was that the goal they set was way too high and they would never actually accomplish it. They seemed excited, and I didn't want to harsh their mellow. But I'm thinking I was probably wrong.

it's not my family