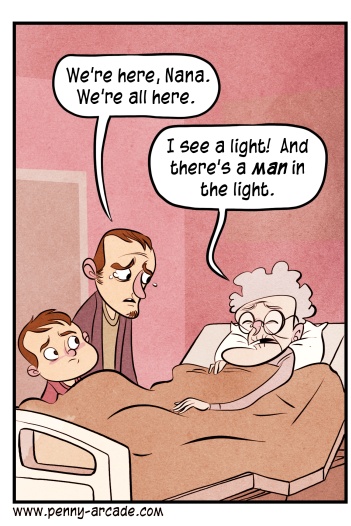 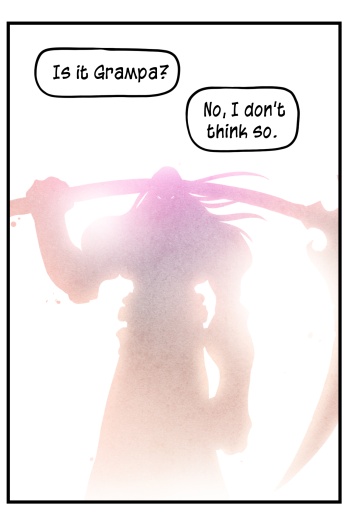 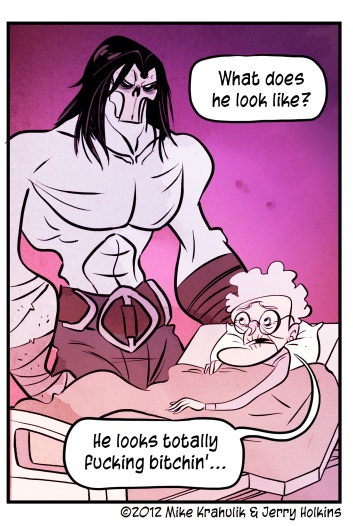 Mike Fehlauher, a man who literally a sword forged to wear at his wedding, stands astride this world and the next. This is an ennobling way to say that he is a huge dork. I called him over the weekend to see if he wanted to press on in our Orcs Must Die 2 campaign, but he didn't answer because he was drinking in the woods with someone literally dressed as an orc. The whole scenario makes me question his dedication, frankly.

But he has a way of describing the kind of fantasy he likes to run at the table, the kind his players savor, and when he allows me to I like to assist him in the embroidery of same. He describes it as "van art" fantasy; that is to say, the kind of fantasy that would look incredibly sweet airbrushed on the side of a van.

There are elements of Darksiders 2 (or "II," which is pronounced "twooooooooo") that subscribe to this sweet, some might say bitchin' aesthetic. Death here with the Death Mask covered with Skulls n' Shit secretes it - this "fluid" crawls languorously from the tap. And then there's stuff that is decidedly not that, very nearby: architectural feats the mind reads as real, somehow. Mythic iconography taken shape. This game is a book, and Mr. Death Face is the cover; keep the old adage close-by.

We are having an incredibly difficult time staying focused on "the coin," the little UI boinkazoink that tells us what a responsible harbinger would be doing right now. But we can't! There are dungeons jammed way, way up his thing's ass. The addition of loot, wholly unnecessary but profoundly welcome, makes these detours irresistible - anything to get ahead of the curve. And with weapons that eat other weapons, you want a constant supply of food. Don't forget that the game is, at it's core, a Legend of Zelda styled adventure. You are slowly accruing the tools to master the environment, a satisfying arc on its own, sufficient to yoke the mind.

Imagine some inveterate cackler appending randomized loot to that potent mix. That person would be a criminal. This is a person people would get together and hang from a lamppost.