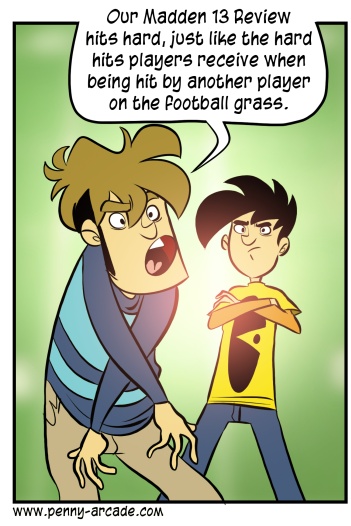 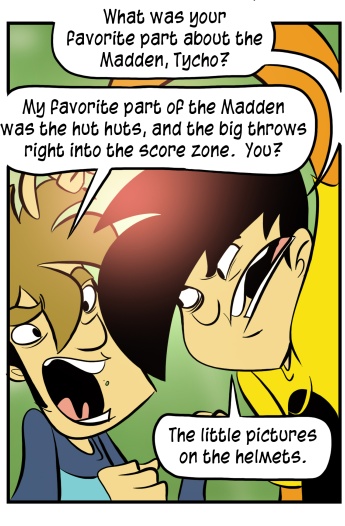 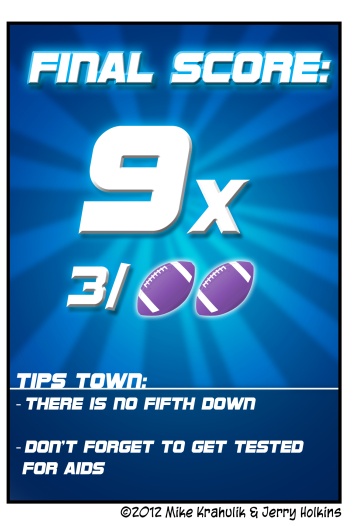 There is another Madden game out, a football simulator, and because I know you are starved for our incomparable insights into Sports we have done everything to encapsulate our crucial perspective in comic form.

I know people for whom the sum total of the "game industry" is Angry Birds, Madden, and Call of Duty. These are not vile "dudebros" - and let's not bro-shame, if we can help it - they're just people who can literally play like three games all year and feel like that was a good year. They've got a game to play with their friends, a game to play by themselves, and something to do in line at the Butt Store or whatever. As a point of comparison, I have been installing a game while typing this paragraph.

I love to read Bill Abner's stuff about Madden over at No High Scores because he actually cares about it, and has the years of experience with games of this kind to contextualize the changes that arise in a game that is remade year after year. I'm not likely to start playing them anytime soon, but I do appreciate a peek into why someone would.

How much I like a Sporting Thing generally follows the pattern

Which I understand is ridiculous, on some level. I also have an exception at the ready for Actual Sports, so you know it's an Actual Rule and not some flimsy, waist-high assertion.

Once a company has had success on Kickstarter, it's often parleyed into another success; I put in for Mantic's Kings of War ancient skirmish thingy, which caused me to get a heads up on their next one: DreadBall.

You have to have incredibly large balls (or ball equivalent organs) to make a football boardgame with fantasy races, you just do; Blood Bowl exists, and has for a quarter century. It looms, one might say. But I love seeing how another person might fill in the same silhouette: the designer is fully aware of the necessary comparisons, and I loved reading about his approach. There's more specifics in a BoardGameGeek thread, as there tends to be. I've spent enough of your money, this isn't about that; it's a look into the human aspect of design, particularly design on trodden ground, and I thought you might find it interesting.

Oh! And welcome to PAX. Look for me; I'll be around.

a chemical for every need