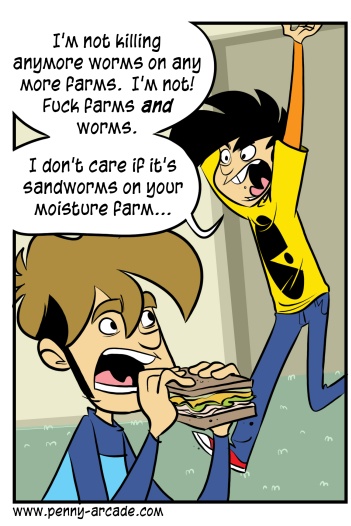 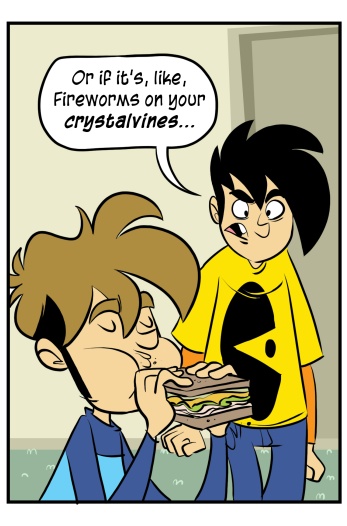 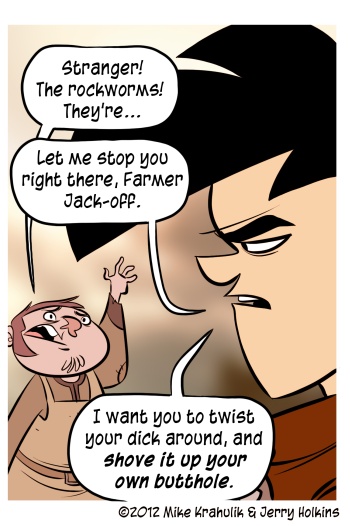 Worms have historically been a boon to farmers, engineering the soil for greater efficiency. The worms in Guild Wars 2's human starter area are not these worms: their segmented bodies are seven feet of reeking, living sausage crammed into armored plates. Their matriarchs are like ravenous telephone poles. What do you you get for culling this demonic herd? The farmer will let you buy her shit, with a currency I didn't even know I was earning. Mysteries within mysteries!

This isn't a review or whatever; as I say right there, I just got in the door. But I have to wonder precisely how much more worm duty I can endure. Is it bioaccumulative? Sometimes I think I can feel it pooling in warm pockets throughout my trunk.

Twitter tells us that the act described in the third panel of today's strip is called a "Key West Boomerang," but I'm afraid to prove this assertion with a keyword search because then I might see what looks like.

On the "On The Rain-Slick Precipice Of Darkness 3" front, starting today and for the duration of PAX you can get the game for three bucks on Steam or on Xbox. Speaking of which, that's how much it will be on Mobile platforms when they launch in October. It might be done before then, but there's a lot that you can't control about those things. We'll play that part by ear.

The mobile versions include the free "Lair of The Seamstress" DLC out the gate, but everybody else should get that about the same time. The last DLC, which takes place before the game because that's the optimally pretentious way to tell a story like this, should hit before Christmas.

i can do with a little less fire