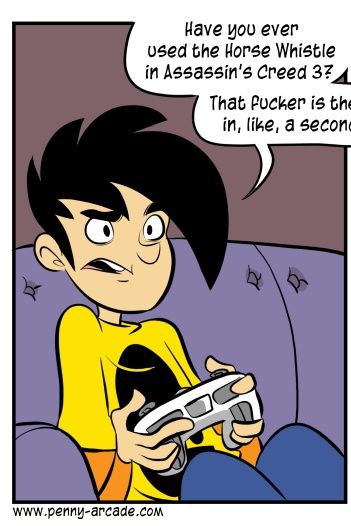 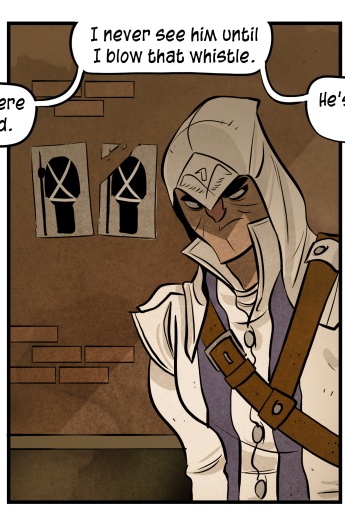 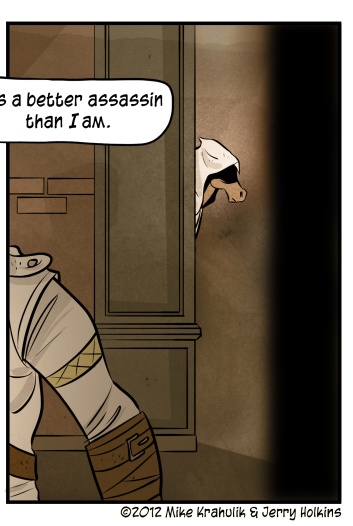 We have always liked Assassin's Creed, even when you weren't supposed to - even everyone agreed it was a no-no. A huge part of that is that we did not make up a game we thought it was, and then scourge it based on how often it diverged from that fantasy. We play them in stages, where Gabriel gets us through the atmosphere and I typically take over because I want to see the story resolve. I'm not sure which part that is within the astronomy metaphor. Let's say it's the moon.

Something you're going to get a lot of use out of in Assassin's Creed 3 is the Horse Whistle, which is probably self-explanatory, but it might be worth going into. It's a whistle that calls your horse. It may have some other use I haven't discovered yet. But when I blow through it, a horse arrives almost as if by magic. Just fucking materializes. At that point you can ride it around, or just straight-up appreciate that motherfucker.

You win. In either case.

The icon for the horse on the minimap is the icon of the Order; there is no distinction made between the horse and, say, a full Assassin. If I as the protagonist were on someone else's minimap, the icon would be the same as this horse. What that says me to me is that horsassins are absolutely canonical expressions of the setting. It literally explains everything.

I told you that I would never take a job at 343 Industries, because their task was impossible; it's all the more startling, then, that they managed to accomplish it.

It's the best Halo campaign of the series, I don't think there's really going to be much of a debate there. Because the human brain is a Goddamned, stupid anachronism and barely up the fucking task, if Halo 4 had simply been as good as the previous games it would have been a failure. It is, in actual fact, a game that will make you give a shit about Halo. I had more narrative buy-in after the first ten minutes than any other game in the series managed to generate by the end.

When Bungie checked one of these things in, their games were "Halo" virtually by definition. That wasn't the case for this team. They had to earn it. And by God, they did.