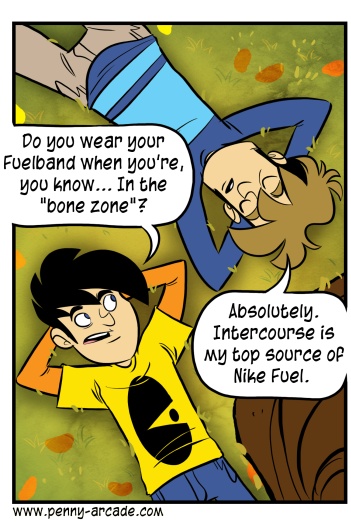 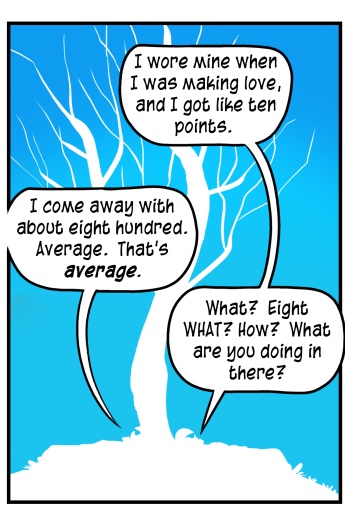 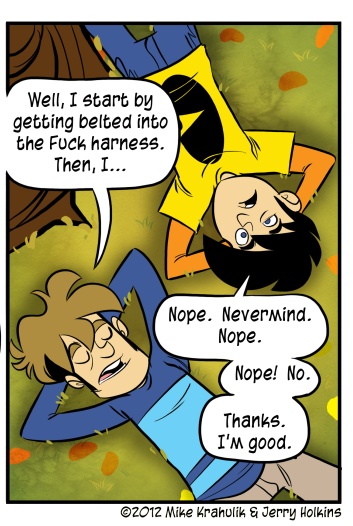 Erika actually gives a shit about her health, which is just... incredibly novel. She actively tries to do physically difficult things on purpose, and not just, like, trying to ride your bike home even though you shouldn't because you are as drunk as you have ever been.

She has said that she would cut off her own arm the moment a Nike cyberlimb became available, so when a copy of Nike+ Kinect Training showed up at the office, instead of throwing it into the hallway like I usually do with tribute that displeases me I put it on her desk. She came back with a review of the product that bordered on the fanatical seed of a new religion, and it wasn't but a couple days until I saw a Fuelband on Gabriel's wrist and heard about Kara's second-hand.

As a Christmas Present a couple years ago, Robert got me "personal training," which I felt weird about initially, and continued to feel weird about as I lifted heavy things and was verbally abused for my sloth, but then it started to be kind of interesting. Also, it allowed me to gnaw on a smoked haunch with somewhat less shame than usual. Everyone has a different fitness goal, I guess; mine is to get no worse.

At the end of the writing on Precipice 3, I couldn't make time for it anymore. It sort of fell out of my life, and to my detriment; it turns out that if I don't rhythmically shamble my husk on occasion I'm an even bigger asshole than usual. Gigantic, even. An asshole that can be seen from space. People have different bodies, and mine apparently resents simply being a container for my brain.

I picked up a "Fuelband" (a bluetooth accelerometer, among other things) which syncs to all manner of digital apps, and the Nike+ Kinect Training thing, which is not in any way a game and actually feels very much like having a personal trainer. It will run a test on you, score you, and then create a schedule based on what you want to do. It's the most sensible, functional, robust Kinect experience this side of Dance Central, the sort of thing that makes you say, "Oh. Right. Maybe I shouldn't shove this magical camera deep, deep in the garbage."

I can't really make time for the gym right now; that's not time I'm comfortable taking away from work or family. But I can make time for a workout I do in my living room, one that only counts good reps, one that keeps things sufficiently varied. My daughter will sometimes lie on my back when I'm trying to do a push-up; those are pretty hard. But this is something I can and will and have done.

I wasn't able to keep up with Fitocracy because of the data entry aspect - I'm just not good at that kind of stuff. It may have changed some in the interim. I was having a hard time fitting the exercise in at all, I couldn't do the homework. This is why the band's abstraction of movement - Fuel, or, "gamerscore I actually give a shit about" - helps me to actually do it. Its physical presence occupies a portion of my active mind. Eventually we'll have something like this in the wrist itself, but until then, this works pretty well.