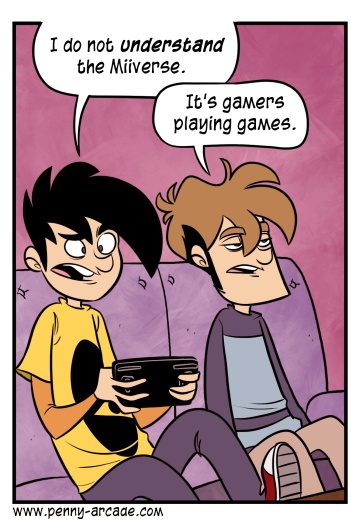 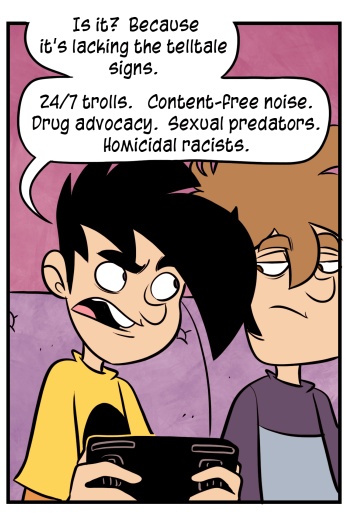 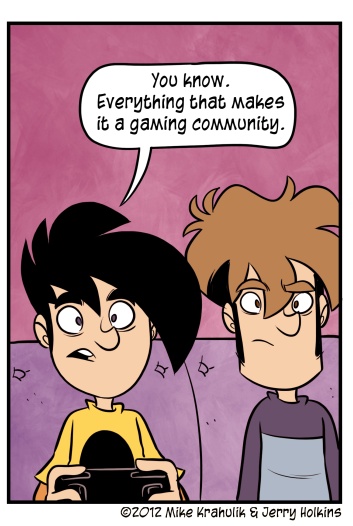 Nintendo's online offerings prior to the Wii U have been... online offerings, I guess you might say. Literal interpretations. We can tell now that they were not full attempts, and it's clear, because when they actually try to do it it looks like this.

The "Theme Park" metaphor leveraged in NintendoLand is purposeful - that's what they think it should be like to interact with people online. It should be like Disneyland. Everyone is there to have fun, and fun is in ready supply. But it must be guarded jealously, like a jewel; it requires secret police and strong image recognition software and constant vigilance to strain the cocks out of the public soup.

I almost wish that - similar to one of Riot's initiatives - we could be party to it. I have enough obsession and compulsion to dig into moderation at the molecular level, and would probably find such an activity more relaxing than playing a game. There's always going to be things that need to be kicked over to the Powers That Be but when I see something like this, something pruned and tucked just so, my strongest urge is to prune and tuck also.

Since the advent of Xbox Live Parties, by which I mean the actual party functionality, I haven't been verbally abused once - I start a party, by reflex, even when I'm playing a single player game. There was a moment last night, trying to fill out a foursome for Spartan Ops, where I had neglected to start one and was exposed to the caustic and howling nether. It's something I resolved forthwith. It's fashionable to talk about who is being abused in these scenarios, and apply integer "scandal" values to each, but the reality is that it happens to everyone all the time and nobody likes it. We have created an elaborate sociomechanical device which is not currently and may not in its present form be capable of serving its creators in any humane way. Xbox Live is legendary for being vile, and has been virtually since its inception. So you'll forgive me, I hope, if I find today's timely horror a little theatrical.

What differentiates Nintendo's approach - and this is the fascinating bit, given its contemporaries - is that they focus on the experience people are having, and use that metric to judge the quality of it. They see the content of this commons as their responsibility, because people associate the things that happen there directly with the product. The service is not some haunted wood out back, whose unaccountable evil is announced with makeshift signs. Nintendo didn't wait for the world to change; they decided to go the other way 'round.