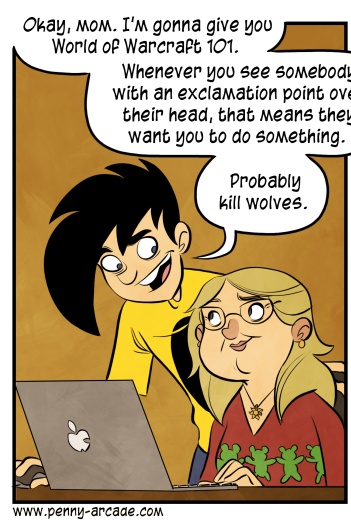 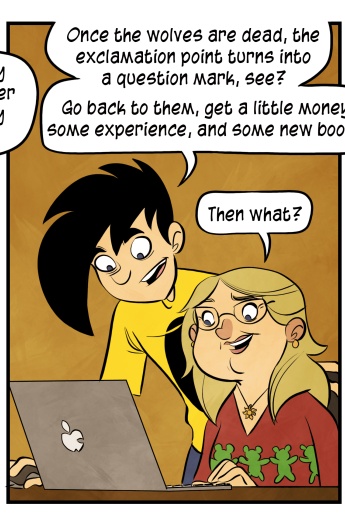 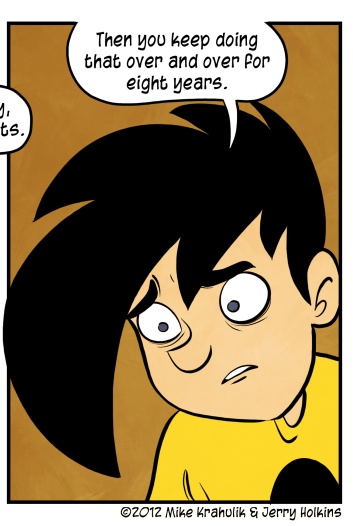 Because World of Warcraft is A DISEASE, it's no real surprise that it managed to leap off of Gabriel somehow and onto his mom, who has begun to show symptoms. Thus another of the High Houses meets its end.

Everyone has the bright, mental pathways we use to amuse ourselves, the ones we activate with games electronic and otherwise, coaxing joy out of some buried machinery in our brains. We used to hide these things, on two axes, or maybe three: we used to hide it on physical machines which used to be difficult or impossible to own, we'd put it in software whose acquisition was, for most, non-trivial, and then we used to hide it inside the games themselves, via byzantine methods and structures of play which required comprehensive knowledge of games like it.

Don't get me wrong; Byzantine is my middle name. Well, Byzantium. It's close. I love that stuff, but it's like a carapace that keeps what we do "secret and safe" and retains the sense that we do what we do in our damp cloister. There will always be a place for us to be moist together, but things have moved away from that. "Consolitis" has consoles as a factor, but the wider trend toward the democratization of digital play looms large.

World of Warcraft is in no way the game I played in 2004, not anymore. Goldshire is still there, and no doubt there is some backwater Horde shithole which serves the same purpose, but they're just giving shit away now. It's like a pinata that hits itself. Tycho.2001 would no doubt have lamented it, and attempted these creatures out of the temple; even Tycho.2012 (correctly) laments some percentage of the monetization frenzy connected with Free To Play, a model deeply connected with the move. But if the net effect of these shifts is that Gabe's mom is out skinning an electronic wolf somewhere to make a pair of pants, I'm gonna call it good.

thy deep and dreamless sleep