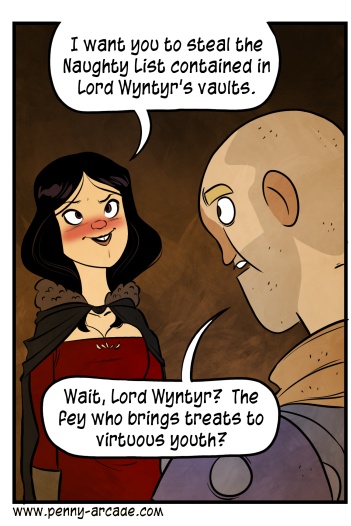 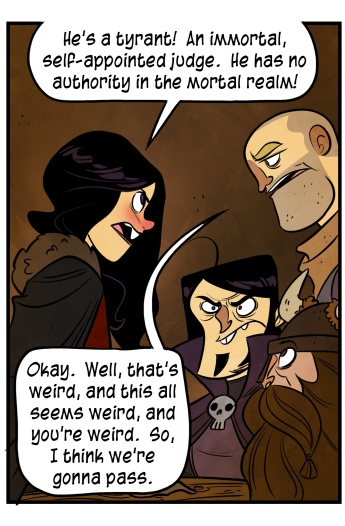 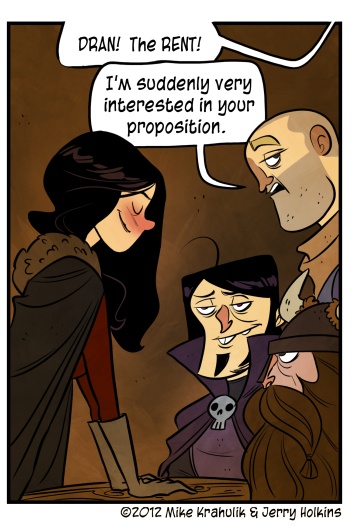 I like Acquisitions Incorporated a lot. On some level, it was an advertisement I suppose, but I think it's one of the good ones and the kind of thing I'd be getting up to anyway. The series we're doing now isn't work for hire, or a partnership along the lines of Scott's Table Titans - this one's on the house, which is no doubt bad business, but we can't leave these characters well enough alone. Anything official this year is a part of their Underdark push anyway, and the characters in Vault of Winter basically go to the polar opposite of that.

It's a very strange thing to have them be born in one place, in one context, and then try to go about the process of making them Real Boys. Like any other time we indulge ourselves in an extended piece, now I don't want to stop. Completely independent of any specific game, there's no ceiling on the shit I could pull off with this crew. Plus, armed with Kiko's official sigil:

there's no end to the branding opportunities, one of which could be for use as a literal brand. Here is THE VAULT OF WINTER, Part Two.

One of very few scenarios where I can cosplay in an utterly sanctioned way, clad thickly in ironic plate, the Live games - roleplaying as theater - work far better than I would have suspected. People watch other people play games all the time, so I should have recognized that proxy-play has a fairly storied history and taken it from there. It's not actually that weird; and it works so well that I suspect it must not be that uncommon, even if I've never heard of it happening somewhere else.

As the Cleric of the table, I think I probably end up playing the most actual Dungeons & Dragons at the games. I need to make sure the numerical "spine" of the game is standing mostly upright so that shenangians might bloom unimpeded. Then again, and this would be my thing, I'm probably overthinking it. One of the more interesting, endlessly referenced events was the dissolution of a party member in magical acid, which I was unable to prevent.

To this point, fear not; Aeofel enthusiasts will get their cameo. I didn't resurrect his mystical ass for kicks.