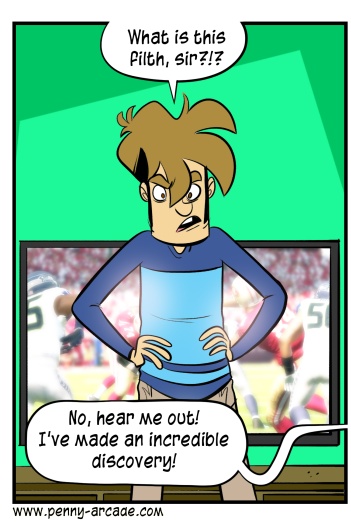 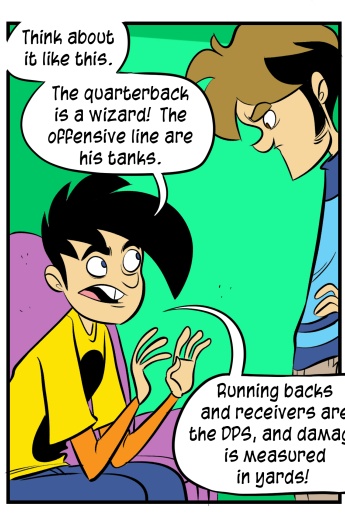 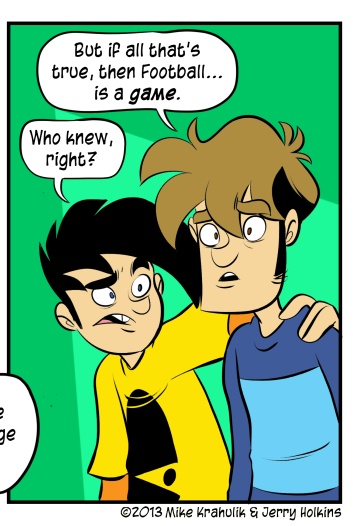 I would like football or, indeed, any sport, much better if each town did battle with other towns via spirit animals like immortal hawks and great bears. Like, if we made them battle with one another in arenas, and if they got hungry for soul essence or whatever they would just swipe at the gathered throng with a spectral paw. But I feel like this latest season (of the actual game) might represent a turning point.

Here's the comic, which is the latest snapshot of our progressive revelation. There was a typo, and I uploaded a repaired version, but then there was a mechanical problem with the way we represented the game of football - transposing offense for defense, if you can believe it - which is super shameful. But we're not like those carpetbagger fake geek girls, who only pretend to like this stuff so we can twist up your D. Unless that's what you want! I'll go Clown School on that thing. I'll make your dick look like a French Horn if you can tell me which one of these lines is the "Line Of Scrimmage" (???).

His dad was in town a couple weeks ago, and they played the game together in a time-delayed version of childhood. We used to play "NFL2K" on the Dreamcast, the Dreamcast of all things, but we had no idea what we were doing. We were like proto-humans banging on a recently materialized time machine. We played it mostly to troll people who could play the game on voice chat. I wish we could go back and do it again; the trolling works a lot better if you actually win.

The only time I really get to check out the Exhibition Hall at PAX is before the show opens, when people are setting up their shit and it is the most, most annoying thing I could possibly be asking them for. But setup at the Indie Megabooth tends to be very light, there are rarely any three story booths which emulate functioning castles, and I also know a lot of these people for some reason, so it's a place I end up spending a lot of time.

Something I'd wanted to try forever was Antichamber, and it was just sitting there, and the Antichamber Man was also there, but he was not sitting, he was telling me that I should play it, which I did. But I also spent most of the time talking to him, and trying to figure out why he would make a mind-trap of this description, and at its core he seemed to feel like Puzzle Games lie to you; that they're incoherent on some level, and that he thought he could make one that was more true. It comes out on the thirty-first of this month, apparently; Ben's got more for you over at The Report.

I begged Antichamber Man him to show me the spatial tricks he used to make a 3D engine represent these maddening, non-Euclidian logiscapes, and he did so, revealing that the world I was inhabiting was actually an amalgamation of worlds, revealed at his pleasure through a kind of conscious lens. At least, that's what I think he said. Eventually he started "saying" different kinds of colored light instead of words.