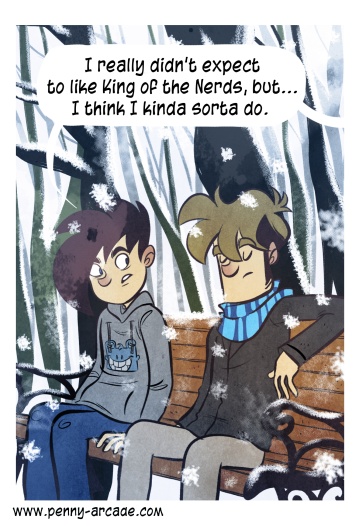 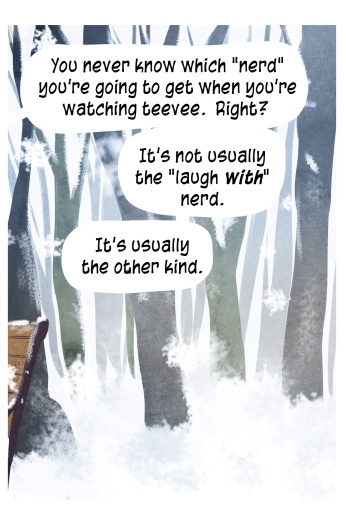 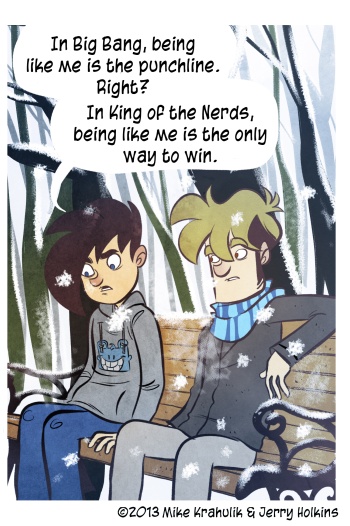 I went over to Arcane Comics for my six month "check-up," filling out trade paperbacks for ongoing lines and interrogating the proprietor as to what I should be reading. He's never steered me wrong yet - Gotham Central, Saga, and Locke & Key have provided me with stalwart, much-needed company lately. I read too fast, and I don't see art, so (as I've discussed) comics aren't usually a good investment. These books have kept going in my head, though - long after I've read them. Easy recommendations, all.

The bag the comics came in was trying to tell me about a show called "King Of The Nerds," which seemed like the sort of thing I would not like, and I felt confident that I could consign the show and indeed the very notion of the show to the nega-zone. Then I started to see the advertisement everywhere, everywhere someone in my "demographic" was likely to look. A "full-court press." That's a sports term, but I think it's right.

The trailer snared my compatriot, though; as he related the strange experience of watching the pilot, I found my curiosity piqued. Ben and Sophie from the Penny Arcade Report also weighed in, compounding this state. I'm afraid to watch it; I'm waiting for the other shoe to drop. I live my life according to the Third Shoe Doctrine: there is always, always another shoe. I have to wait for an All Clear before I commit. I'm sorry.

We have an investment in this terminology, which is bizarre, but still true; I suspect that Jesus had no great love for the cross, or the lash, but here we are traipsing around in the fetters of our enemies' ill-will. This isn't a state that can long continue, its tenacity is simply a function of the pain with which it was applied. Will this be true for our larvae? Who knows. It's hard to see the changes when you are looking with passionate intensity at your own time-shifted torment.

I picked up my son from school last week, and his "thinking face" was apparent; I waited until he had finished chewing.

"Some kids called me a nerd today," he said.

How did that make you feel?

"It didn't make me feel like anything," he replied. "There's no such thing as a nerd."