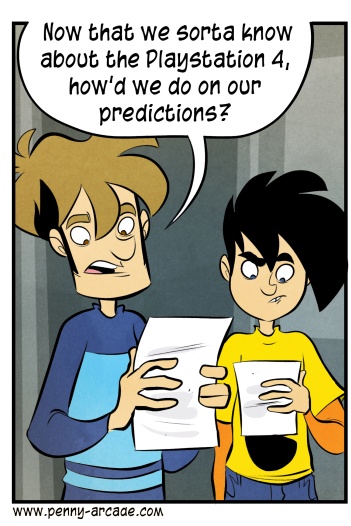 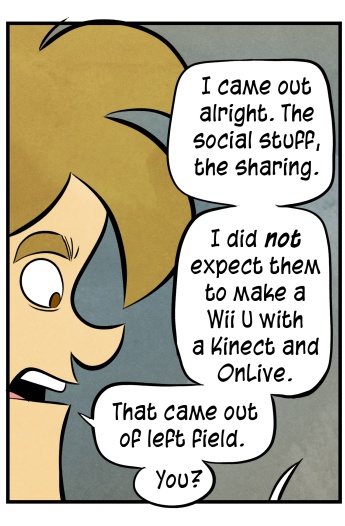 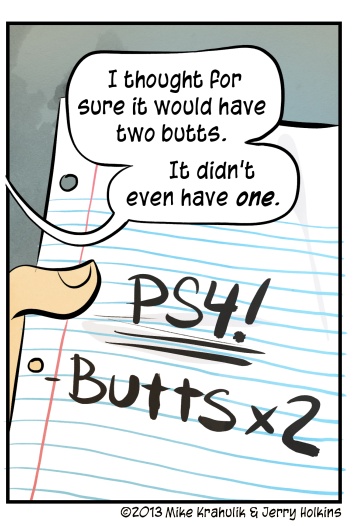 There were actually two separate presentations by Sony during the reveal of the Playstation 4: one for developers, which might have been better situated at a GDC, and a second presentation which showed incredibly high resolution videogames in various states of undress. Predictions were verified, or sundered, by virtue of their truth content. The bump to eight gigs of ram was clearly a recent addition, and there's a lot of gesticulation toward the more "wibbly-wobbly" and "timey-wimey" aspects of the backend. By the end, though, they showed a machine that was exquisitely tuned to this particular nanosecond.

We already knew how watchdoggy Watch Underscore Dogs was going to be, and Square Enix coming on stage to show another "real time demo" of "what we can expect" in the next generation has achieved ritual status. But the demo for "deep down" was... now we're getting somewhere. I'm so glad that Demon's Souls is a genre now, and maybe that sounds facetious, but I couldn't possibly mean that statement more.

As I said, not that it is some great feat of augury, the Service is ascendant. As an old person, they showed many things that are clearly of interest to the less old. You might recall our "coverage" of OnLive, which featured one of my favorite strips but also detailed how fascinated we were by the social aspects - they've come home to roost in the PS4, with a dedicated button and ever'thing. That kind of stuff isn't weird now, and is an assumption for a lot of people. For me, Achievements are by themselves skirting the limits of my threshold for surveillance; I'm not going to push a button so that people can watch me compare two slightly different hats for twenty minutes. Old. Right? But I'm not so old that I don't see why it's cool. Using the same technology to stream demos of games you can then buy instantaneously and then play while they download seems like an incredibly expensive proposition. To me, I mean.

Because of the buying.

People who write about this kind of thing might have a different relationship to hardware. For example, Cloud Storage for saved games is rapidly approaching must-have for me, when for most people it's functionally irrelevant - all the same, I don't think you can release something that doesn't have that, now. The two best peripherals of this generation are, I suspect, fairly boring on paper: the 360's Dual Charger and controller-mounted chatpads. There are peripherals which purport and occasionally deliver on radical new etceterae, but if you like playing videogames and must respond to messages, these two things improve your life immeasurably and on a daily basis. They have more opportunity to be used. The fact remains that at no time in the life of the 360 have I ever been without a controller for more than fifteen seconds. I have on more than one occasion been without a console as a result of poor manufacturing quality, but that might be a different conversation.

This is the kind of practical, everyday stuff I want to know about, because I like games and don't want to incorporate my Facebook friends or use my real name or any of that shit. I hate it. I want it sequestered in an app where I don't have to install it, and fuck that. But I don't think we get to make that choice anymore. Many of the things they described as features are fairly transparent social marketing ploys, from their Metro inspired Live Tiles to it telling you what your friends most recently bought to it downloading games for you. You don't even have to say it, because I'm already saying it in my own head: Old. But there it is, all the same.

After absorbing the presentation, I feel confident in saying that the Wii U is the last of the traditional consoles, perhaps the last one ever. Sony's hour-long apology to publishers for the Playstation 3 (coupled with the leaked Durango specs) make this fairly clear. Dedicated PCs with custom operating systems are the future, if not the present; it might be worth taking a moment to really let that soak in.