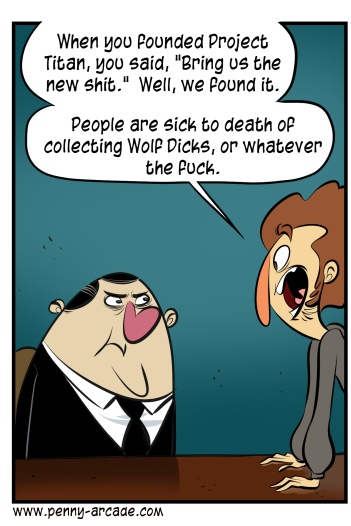 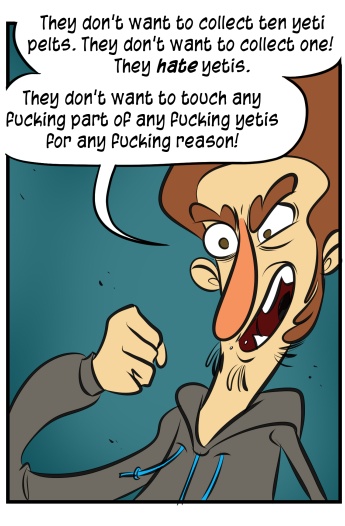 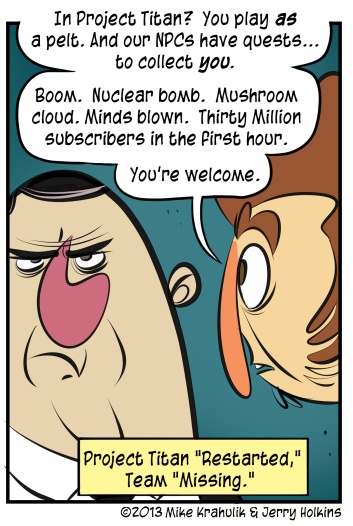 When you have made a successful game, making a sequel is just what happens. It's natural! Physics asserts itself, and the notion condenses out of the solution.

I don't mean that making it is autonomic. Even telling other people to make things is exhausting; ask Jeff, who has maintained a tyrannical atmosphere the last few weeks to get On The Rain-Slick Precipice 4 out the door on Friday. But whether or not a project like that is undertaken at all is more straightforward.

Asheron's Call had done well, that was the one I'd actually lost myself in completely, and since making a sequel to successful games is what you do, they made another one that collapsed in months. You can see the "mad science" aspects of the plan from our current chronojuncture: the creation of an ultrabeast, leveraging existing DNA, who has the same food source as the original organism. It's not something you should do. This is how conventional wisdom turns people into dumb animals.

For years, NC Soft enunciated a discrete plan - to make and sustain a host of massively multiplayer games that invariably caught the players churned out of other genre entries. Their own, and others. EVE Online has simply reinvested in the original game. But if you are operating World of Warcraft, we know now that you don't make a "World of Warcraft 2." The reality is that we're on World of Warcraft 5 already, and it's still not done.

The neural pathways that reward me for incremental bar upgrades interspersed by wilderness constitutionals have almost been burned completely out. Independent of market saturation or any other thing, millions of people have undergone a similarly focused lobotomy. That, more than any other thing, necessitates expansion. When World of Warcraft came out, it could succeed by being the best version of its experience. The eight and a half years since have seen frenzied experimentation, much of it spawned by and caustic to the game's fundamental model.

When I heard that Blizzard's still secretive Project Titan was going back to the drawing board, or being taken out behind the woodshed, or whichever colloquial phrase best describes its quantum state, I wasn't too surprised. I wasn't expecting it anytime soon, anyway. Given the weight of their task, it's no surprise that it might be unwieldy.