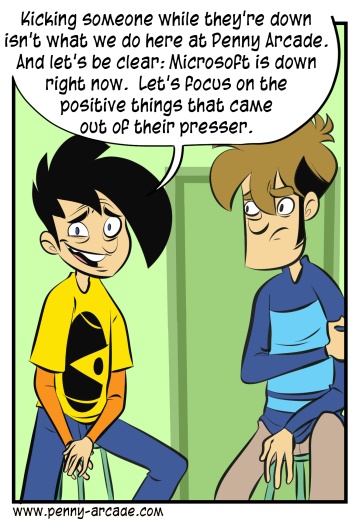 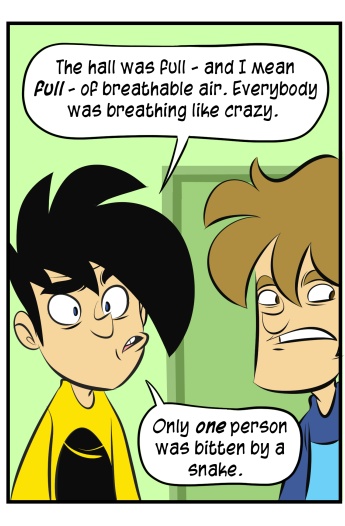 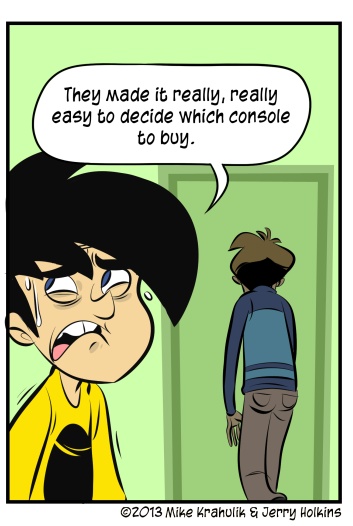 For as long as I've been actively watching industry events unfold, I don't think I've we've ever seen anything quite like what happened at Sony's press conference. It was a conflagration that consumed every cubic centimeter of Microsoft's rhetorical oxygen. The damage was so absolute that to speak publicly in defense of the device known as the "Xbone" is to be made a fool. I would avoid the punch at Microsoft's afterparty.

Until that evening, I thought the presentation from MS had good things going for it; your mileage may vary, dependent wholly upon your definition of "good." Titanfall is one of very, very few meaningful exclusives, for example. But publishers are basically letting them twist in the wind, now, even though the system was created more or less to court their stated aims. The topic of Restrictions On Used is so toxic that nobody wants anywhere near it; they don't want to join Microsoft at the bottom of the ocean.

When we were sitting down to write the strip, I happened to see a PS4 story on Kontralto called "Third Party Publishers Will Have Final Say On Used Games," and I don't know entirely what that means, but it does appear to mean something less universal than the thunderously applauded public beheading we witnessed earlier.

At a hundred dollars, the price differential is almost entirely down to the universal inclusion of Microsoft's sorcerous new Kinect. Before the relative prices were established, it was possible to float by, buoyed by brand loyalty or any other thing. After that, there was no after that - only a blast plain. The show was over. When I went to Amazon to preorder a PS4 - I'll buy the console online now too, thanks, along with all my games - there is a PS4 "Launch Edition" that seems to include their camera but there's currently no price listed. I'm smart, though; I can figure it out.

This generation is informed by the last, and this hungry Sony is the result of long years of war. From the first leaks, Microsoft has been on the run and they never got in front of it. It's a disappointing state of affairs - I think we're all better served when there is a skirmish.

Even if Microsoft can't communicate it, or did it in a way that people manifestly despise, there has to be a conversation about the portability of digital rights that covers the libraries we accrue on modern devices, up to and including Steam. This is very much a triumph of the status quo, and the status quo where electronic "property" is concerned kinda sucks.