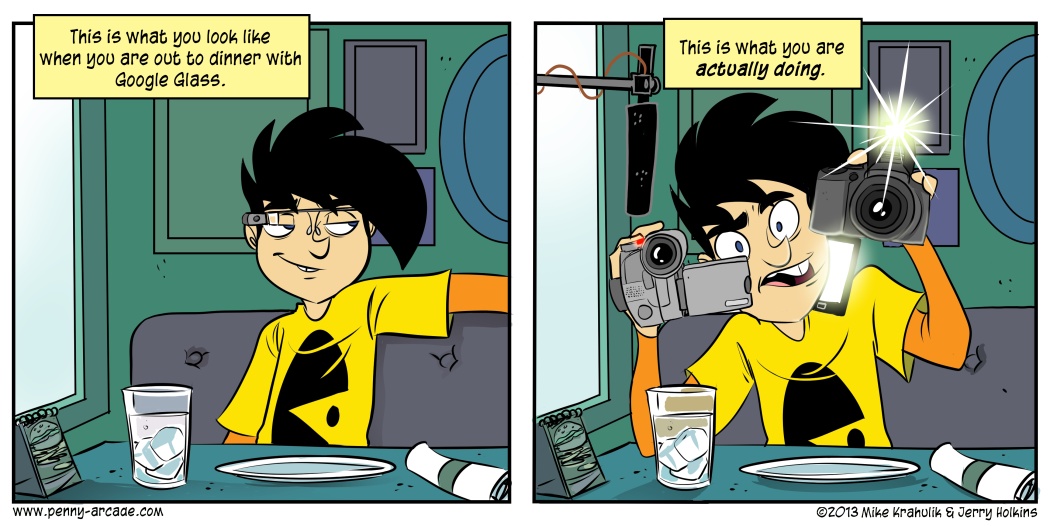 We've been living with Glass since my co-conspirator returned with it on his brow, and simply by being present it has a warping effect on the social fabric.

Someone had to get out there, way out front, and do something like this; this was always work that needed doing, and has value thereby. But that is a matter quite apart from it being the sort of thing that becomes "normal." Shockingly, the problems aren't with Glass, which is where you'd think the problems would stem from. It listens like a boon companion and acts decisively. They did precisely what they intended to do, and as a tertiary, electronic "mind" it makes a case for itself.

When I say it warps the social fabric, I mean that every person who enters its nimbus (read: every person you force to contend with it) has a different reaction, sometimes more than one simultaneously. We were trying to show Kiko the new thing that we had, it is a computer you wear on your head, and he kept trying to fold his body in a way that would minimize its surface area. He did not want to be gazed upon. He could feel an array of indistinct, ill-defined "beams" emanating from the machine at odd angles and he was concerned about "absorption."

I think a big part of it is always going to be that it is on your head, and partially obscures your face. Faces are extremely important, and I don't just mean that it's good to have one. It's better to be with than without, certainly. This is about brains, and how we're animals pretty much, even if people don't like the term or have a utopian vision of whatever I can't even finish the sentence. We process faces. We have done this for a long time and we do this very well because this is an incredibly useful type of information. And if you have something over your eye that occasionally flares into burning light, we process that too. I'm not sure we know what it means quite yet.

I've seen it mentioned in a few places that one of Microsoft's main problems at E3 was "messaging." That's always been one of their main problems, that's not new, and it's exacerbated because they're always trying to do shit that requires super tight message. The first Xbox tried to launch a multiplayer service in a world where people still used modems unironically - requiring broadband in 2002 was weird. They've never been able to explain themselves, and part of it is an engineer culture that doesn't (marketing term incoming) "face" consumers and, I would suspect, resents being made to explain why something which is so manifestly efficient and purposeful would need to be. Contrast this with Sony, which is almost completely a brand exercise and for whom the tone and texture of a message is the primary product.

The problem isn't entirely messaging, of course - the problem is that they're trying to hasten what many people see as a consumer apocalypse. But let's walk it through.

Microsoft has been stacking functionality into the Apps they have on Android, iOS, and Windows Phone since their inception - turning a friends list app into a multipurpose Second Screen with SmartGlass, for example. If the authorization files are as small as they told Ben, why aren't they - in 2013 - pitching the fucking App as the center of this service? It's the "keyring" that holds your library, which you can take anywhere and log in with. Box wasn't able to communicate for twenty-four hours? No problem, the phone checks you in. Want to give a game, trade one in, buy a game, add a family member? You do that with your thumb. This isn't weird at all - this is literally the most basic thing they could do. You want to knock on their foreheads sometimes, just to see what kind of sound it would make. 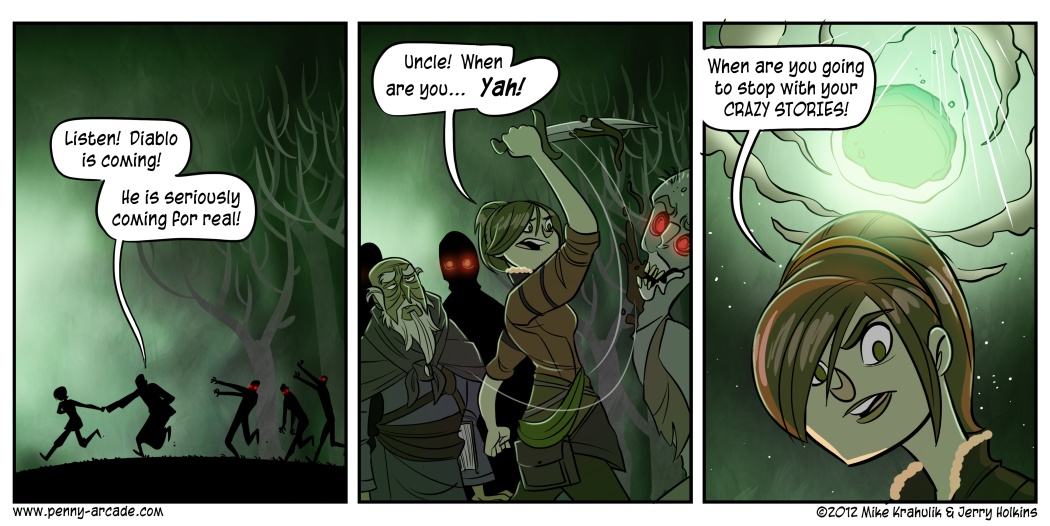