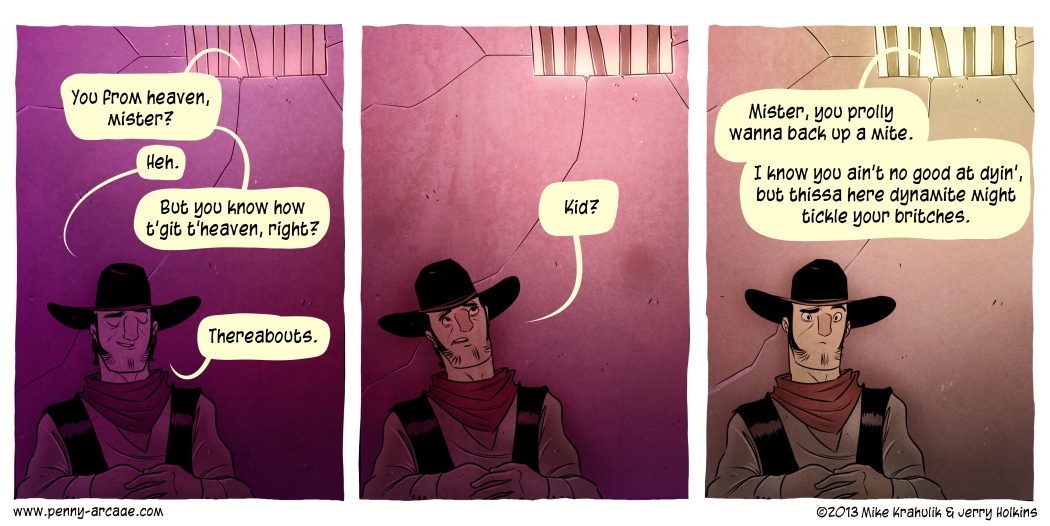 I caught the last of the MC Frontalot/Protomen shows Sunday night, and in abrogation of my typical "politely refuse offered drinks" policy I instead accepted them graciously and applied them directly. When I woke up, I had the distinct impression of being on the deck of a ship - a sensation which has not abated. When I walk down the hall, I won't lie: I cut a fairly jaunty arc.

I also had several more conversations related to whether or not we would ever return to Australia for any reason, let alone because we now operate an annual convention in Melbourne. It's not my expectation that an individual will read every update, and indeed, such a policy would be unreasonable. But when you couple that with the fact that I have a condition which makes it difficult for me to promote my own Goddamned work, opportunities for crack-slipping abound. There are three PAX shows, and one of them takes place in Melbourne. Specifically Melbourne, VIC. Also, Zeboyd and I finished On The Rain-Slick Precipice Of Darkness with Episode Four. Oh! And I'm in Australia.

There is a washer and dryer in this room, the one we're staying in, and we're just about done washing everything so that we can pack our suitcases with clean clothes for the return trip. There is something about that - something symmetrical, parenthetical - that feels so good you just have to sit and vibrate for a little while. It feels like you've discovered some hidden victory condition when you pull it off; I can see multipliers and points of various kinds leaping right off the luggage.

I will not miss the seventeen hours spent in the fucking Warp to get here and back, but I will absolutely miss being here. Specifically, the aspirations after hard consonants and most especially their long O vowel. I have tried to reproduce it with my own mouth and I can't do it; presumably it has a dietary component. Thank you very much, Australia. I'll see you next year because that is when I am coming back.