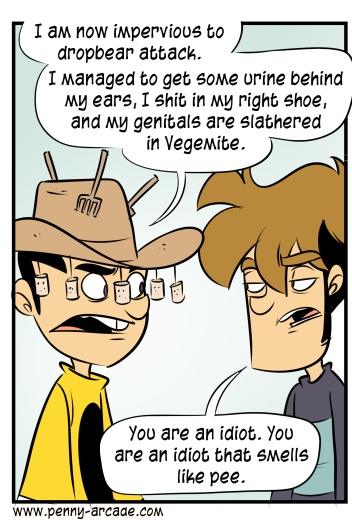 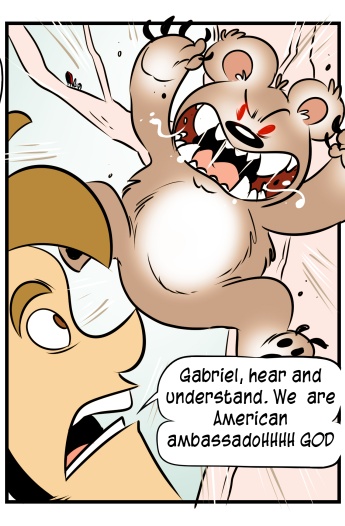 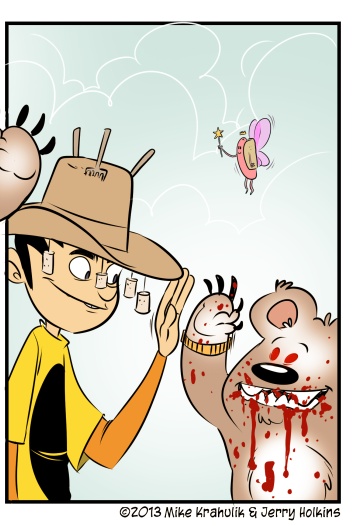 We did a "Make A Strip" panel at the last PAX, in accordance with the ancient scrolls, but since Sand was still running we couldn't put it up Monday. So, here you are.

As per usual, there are many additions or corrections that were the result of that unique environment. Not Australia, but specifically making a comic in a place where people who are not you have microphones and can make suggestions. The Hot Dog Fairy makes an appearance; the cork hat was also suggested, though it was clear that some Australians find this accessory - really, an accessorized accessory - distasteful. The gross hands of the Koala, upon which dropbears are based, also got some disgusting authenticity from audience suggestions.

Gabe is over there playing Brothers, a tale of two sons, and I'm sorry - I can't ignore it anymore. I thought I might be able to talk about marsupials today, like, their pouches and shit. It might not happen.

Part of the reason it might not happen is because something keeps happening in the game that is so fascinating to me I can't think straight. For a game that has no recognizable language, it's got character bulging at the seams. Grab this trial, by all means - try things with each brother, see how both are filled in by these interactions.

Here's the thing that was kind of freaking me out. The basic hook is that each of your two brothers is controlled by the left or right stick, and each gets a trigger to interact, and that's it. You're done. All their cooperation takes place in your own head and hands, the work of it, that complexity is all modeled and you can feel it. But the younger brother (as you'll see) is more given to flights of fancy. He's on the right stick, so for most people as they control the game, he lags behind. He gets caught up in the environment as you focus on the older brother. He gets lost and you get annoyed. You feel what you are supposed to narratively because of the mechanics and it makes my eyes bug out of my head.

The main thing I want you to take away from all of this is that marsupials are really very novel. The end.