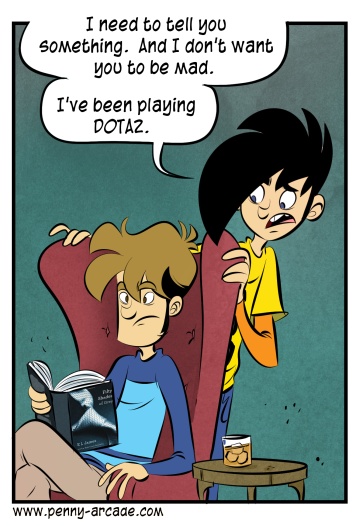 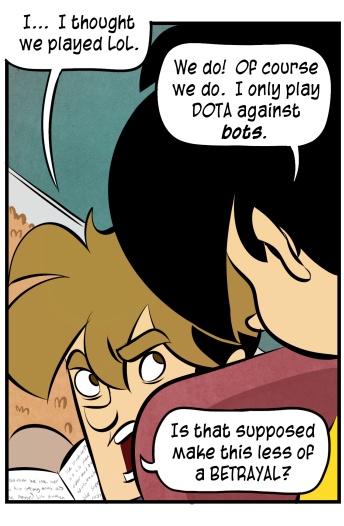 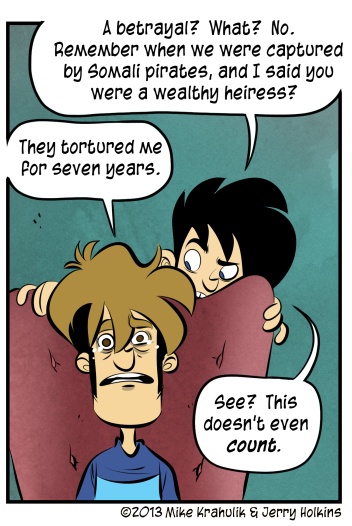 We use the word "betrayal" in the strip, mostly ironically, but there is a little heart-bound ice associated with it. When everyone - and around here, I do mean everyone - has a substantial investment on every investable axis in League of Legends, and then you start engaging in these sunny afternoon trysts with Defense of the Ancients 2, it's like... lips get pursed.

Kiko and I used to specialize in the Betrayal business. We were always flirting around the edge of whatever genre the group was in, foraging for games or mods that had enough in common with the dominant flavor for the group to travel across. There is absolutely a skulduggery aspect, something akin to trolling or pranks, when you try to steer the course of the social ship. In the final assessment, I don't even think Gabriel was even attempting the kind of engineering I was. I think he just got curious, and honestly, it's sort of hard not to be.

DOTA, the little mod that could, has its hooks in the entire industry now. Those concepts aren't merely everywhere in products, they're in the meat of designer-brains. They're in the soil; it's the terroir of a generation. In a hundred years, there will be a sample taken, and we'll see it in the rings. And now the whole thing is free to download, and every frame, every character is executed to a degree well beyond the industry standard. And a boiling mass of digital artisans are making different hats and elks or whatever for you to buy and they're paying rent off it.

Even if you aren't playing it, even if you don't intend to play it, you'd be a fool to look away.

As I suggested immediately upon returning from a faraway land, which might even be the furthest away land, we have another PAX visible on the horizon. A couple, actually: PAX Dev, and PAX Prime, which used to just be PAX. Even though they're a couple weeks away, much about these shows has already coalesced: we have schedules available for PAX Dev and PAX Prime, for example. You can start planning now, if you want to. I would pay special attention to the musical offering - there's been some seismic shifts.