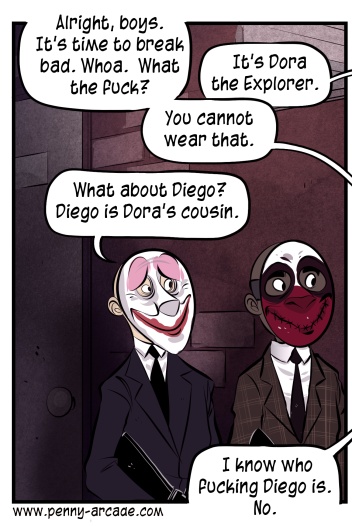 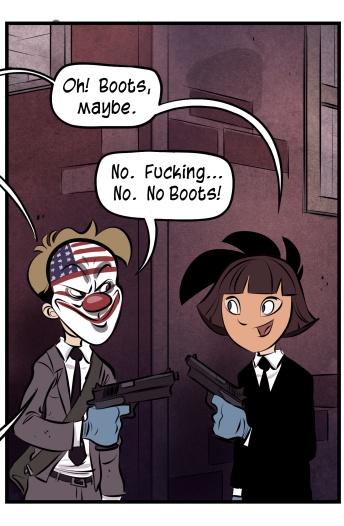 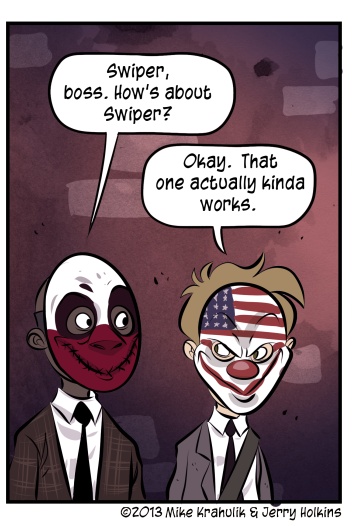 We've been playing Payday 2; see if you can tell.

I didn't end up playing the original Payday. I also missed Killing Floor. The Left 4 Dead games had all this tantalizing ambient story stuff, but the throughline gameplay-wise never lasted for me - never seemed to progress - and I was inoculated to games that shared certain superficial characteristics. My loss, certainly, but not a loss I intended to replicate this time around.

I like Payday 2, despite the fact that I'm not actually sure I understand it at all. I'm at the point right now where I can't tell if the game is hard, or I am terrible at it. Consensus from others seems to be that it's difficult even if you are good at it. There are skills and equipment that allow you to crack open other aspects of the gameplay, to gain access to these tantalizing icons that are scattered all around the levels, but I've seen crews stroll into Jewelry Stores on YouTube at level one and come out with duffel bags full of gold and gems before the cops arrive.

I think "crew" is a big part of it. We might actually need one to play what you could call Actual Payday 2. In much the same way that when we played Starcraft we were actuallly playing Starship Troopers, pitting our Terrans against Zerg and leaving the Protoss out altogether, we're playing a game now where things go really, really poorly for some amateur thieves and they need to kill every policeman in the state while their drill takes ten thousand years to chew through a vault. There is another door inside the vault which must be chewed, also. In Monaco, that's when things go to slapstick, accompanied by a jangling piano run. Here, that kicks off another round of brutal murders.

Throwing a huge sports bag full of money into the back of a van must be seen as the sort of thing you won't forget, interaction wise - joining greats like cracking a safe in Kingpin's Bagman mode, squashing a Goomba, it deserves a seat in that august body. I want to get good enough at the game to really earn it, though. I suspect that's going to take some doing.