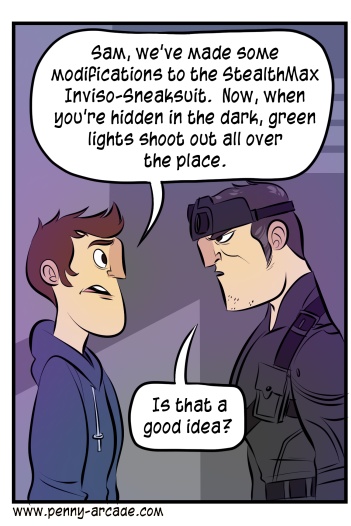 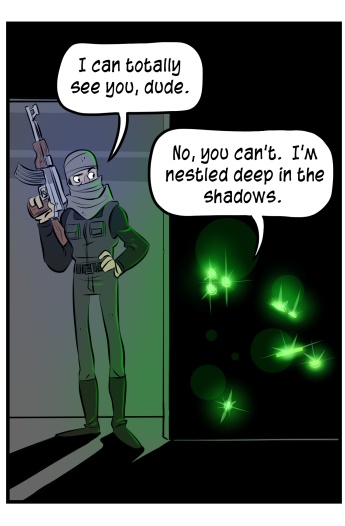 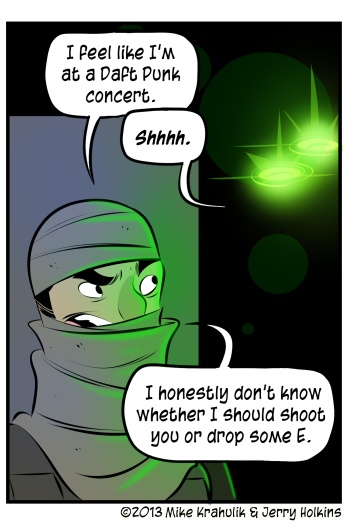 We've been playing Splinter Cell: Blacklist, mostly independently but on occasion together, learning just how spectacularly it is possible to fail when attempting to sneak anywhere in tandem.

Splinter Cell has always been more or less my jam, and whenever someone asks me what my favorite game is I am typically forced to choose between Chaos Theory and whichever other one comes to mind at that particular time. It was such a cross section of gameplay - it's more or less three excellent games - that Double Agent was kind of doomed. Sometimes you can't do the same but better anymore. Sometimes you have to kick the whole thing over.

I was willing to follow them to Conviction, and probably whatever other weirdo thing they wanted to do partially because Splinter Cell is my jam, but also because I was sympathetic to their challenge. I happened to like their proposed combination of a context sensitive stealth trigger and extremely rapid movement; what's more, I liked playing in a way I still thought of as Splinter Cell inside the more aggressive system they provided with Mark & Execute. I'm probably not the only one who liked doing that, because playing that way is strongly emphasized in Blacklist. I tend toward being as quiet as possible with the ability to clear a room acting as a kind of ripcord.

Conviction had a severely underrated cooperative mode that still ranks high for me; even its one on one competitive mode, which I assumed was (and may even have been) thrown in at the last minute, does interesting, rare things. It's a game where two people essentially manipulate the AI against each other, harvesting them for the level's finite points whenever they aren't herding them around. These modes accounted for a playtime two or more times what I got out of the campaign, and they've made an even broader commitment to that side of things in Blacklist: I have five levels I can play in coop on my map at the moment, which is to say nothing of the revamped Spies Vs. Mercs asymmetrical shit. There aren't enough copies in the hands of players to know two thirds of the game right now, so I'll have to get back to you; our preliminary co-op experience on Realistic difficulty strongly implies that these missions represent a more expert style of play.

We also did a comic!!! The concept of special "hiding lights" will never stop being funny to me.