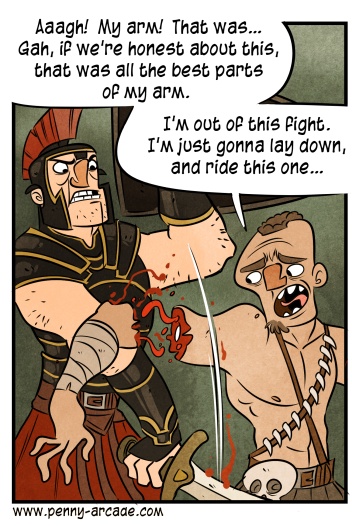 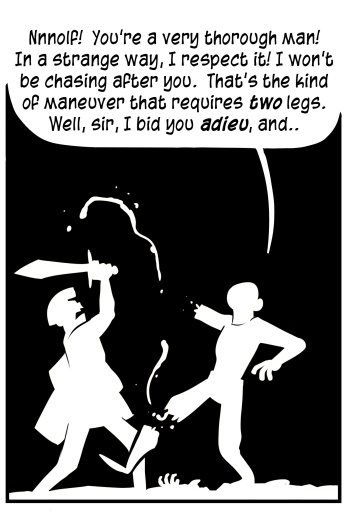 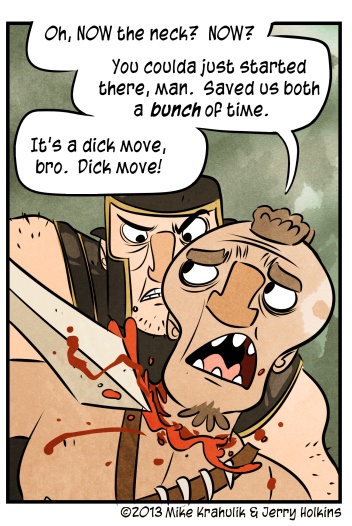 Ryse: Son Of Rome is one of those games where you dice and julienne human beings until you earn enough XP to unlock the brunoise techniques seen in the finer houses. It is a lot of things, and rude is definitely one of them.

I think the Xbox One is on fire.

As a brand, as a philosophy, all of it. This device is like a bottle message from an alternate dimension. It's entirely possible that this strange dimension represents our own future, but I think you might have a tough time making that case.

There are a lot of people who genuinely hate the Kinect. Gabriel is one of them; it is not possible to have a conversation about the device. Every misheard phrase or unintentional activation only cements it, and now it's everywhere, all the time. I used the previous one a lot, though I'm the only person I know who did so; I would never say you had to in order to be a moral person. Voice and gesture is a paradigm for interaction with advantages and disadvantages, but their "wooginess" - their ambiguities - aren't solved problems. I'm routinely not understood when I talk to people. With this knowledge well in evidence, Microsoft doubled down on it. The User Interface is like a physical place: you can get lost in it, and without voice commands a lot of it doesn't make sense. That's why you will hear people issuing voice commands all the time in game chat. And then issuing them again, when they are not perceived.

Gabriel said that he was never able to get the device to turn on with a voice command, which was interesting, because that one works for me every time. But still isn't good news. You turn it off by saying "Xbox, turn off." But you don't turn it on that way: you turn it on by saying "Xbox, on." There's no "turn," like you would expect, like they trained you to do elsewhere. The educational challenge here is profound; it's like learning the perimeter of an Infocom parser. I want to know how a regular, not games obsessed person experiences this. When they get it out of the box. What do they do.

The savage, raking business of "resolutiongate" has sort of shaken itself out for me. This isn't a Wii situation. I think that if you didn't know ahead of time, the vast majority of people wouldn't know or care about how many "p" there were. I will still "know," of course - that, coupled with the fact that I'll need the Playstation version if I ever want to play something with Gabriel (either one) means the Third Party token is moving in a Sony direction.

I know how to use it, and it works for me far, far more often than it doesn't. I can pull of some pretty shocking stuff very quickly. Switching between games and apps and back to games is, frankly, next level shit. But the basics are lost: Friends and Parties, the thing they used to handle best, are incredibly slow. I found this shocking, but what do you say? If the last box is any indication, this isn't the Xbox One owners will have even a year from now. Six months. But today? At this point? All the rhetorical oxygen has been burned away. 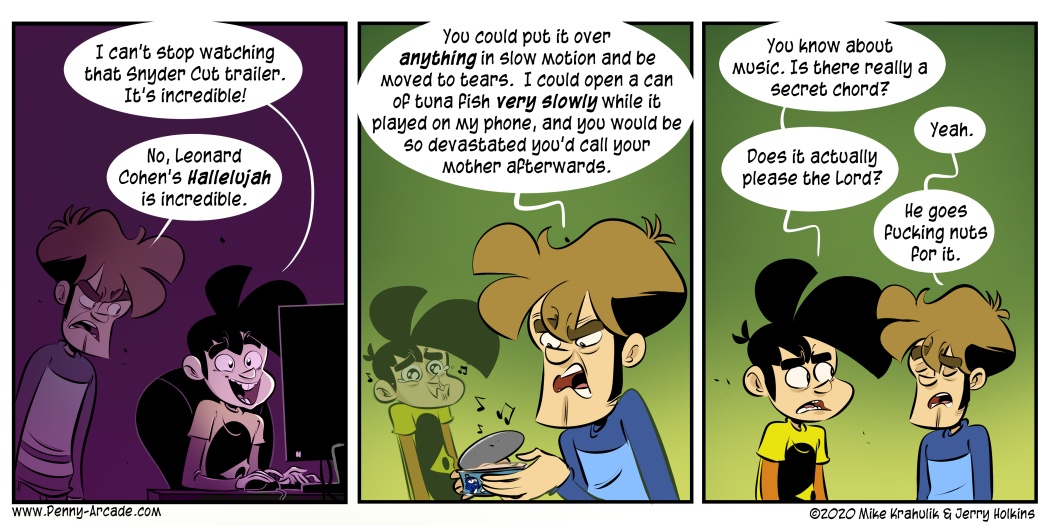