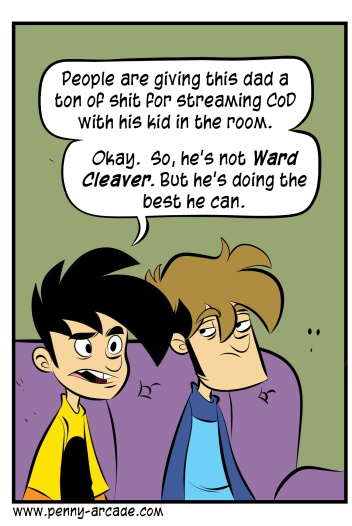 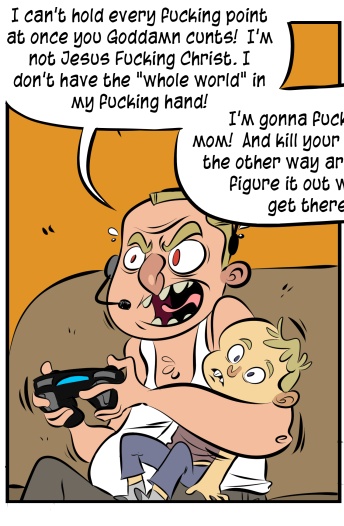 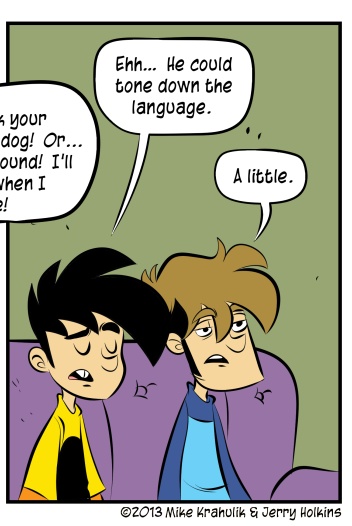 We were talking the other day about the kind of shit you can get up to with a PS4 having only purchased the box, and how freemium stuff like Warframe or DC Universe Online can mollify wastrels who might otherwise turn to vandalism or hard drink.

We also spent a lot of time with the box initially just checking out the base community features, "meeting" people in a strange way, and finding those whose mystic vibrations we were attuned with. There was a dad we watched a few times, and realized the extent to which this is a person you do not see; one sees the young becoming famous in this profoundly modern way, youths of every conceivable configuration, but "dude grooming his larvae" was not a creature in what you might call the base set. We appreciated this until he flipped hard after a close game of Domination and felt supremely chastised for our prior affections.

It is very funny, in that way which not entirely so, to think that video content which has gotten so many people in trouble on YouTube is literally enabled by the press of a single button on the Playstation. There is essentially a button more or less labeled "Infringe" that you push and nobody gives a shit, until such time as someone might see part of one boob.

We are in a position to know, actually, that what people believe about copyright and what happens when you borrow someone's stuff - even to make it cooler! - don't always line up. What's even weirder is that all the current problems seem to exist in some extralegal framework; the times when we ran aground on these things, it was in the age of Cease and Desist. Right? Of physical documents! They would send you a piece of paper inscribed with certain potent symbols and so forth, it was very civilized. The way it works now is that it never interfaces with The True Law at all - people with a claim toward your content can simply redirect the money earned by the amalgamated work. We have seen many shifts of this kind, in every twenty second epoch of the consumer Internet, and I will admit: the treacheries are always expected, but the precise shape of each new mechanism always startles with the extent of its goblin cleverness.