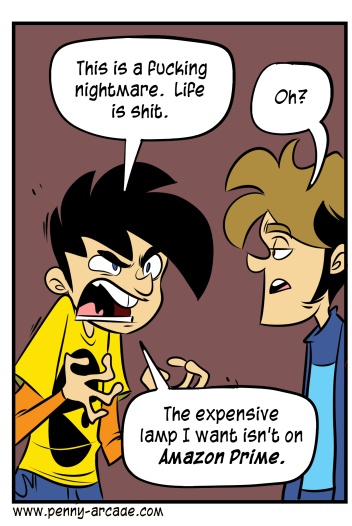 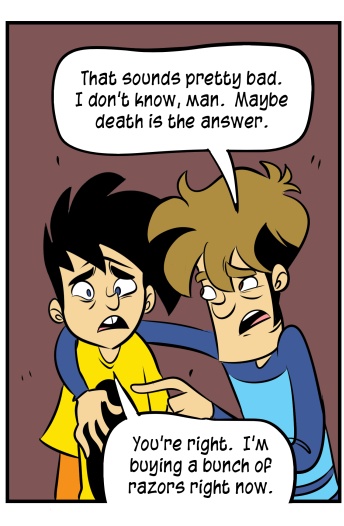 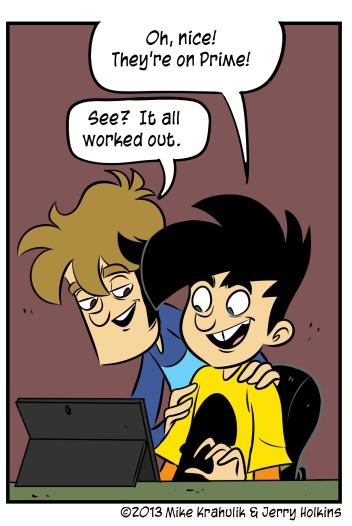 I've talked about this before, in more ephemeral contexts, but Amazon Prime exerts an incredibly bizarre force.

When I heard about it initially, I thought it was weird and made a face to indicate that this was my assessment. Then Brenna subscribed to it, and I needed to make a facsimile of a normal face very quickly even though I was caught substantially off-guard.

There are clearly disparities between actual life-livings and the comic, today and other days. As I have suggested in the past, do not use this page as a source of information on Antarctic birds. This being said any person who has ever been awash in the fields generated by the service knows perfectly well that the thing distorts behavior.

Amazon was already an engine designed to maximally wring out the impulse purchase; that was always true. The only thing that keeps people from buying everything else on Ormazorm is shipping, which we can think of as a tax levied by an oppressive and fundamentally unjust physical universe. Obviate this, and you become like as unto a God. We're all aware that this is its function, this tactical obliteration of the Danegeld we pay to immoral, ultimately illusory three dimensional space. But it's such a simple maneuver, enabled by the profundities of their scale, that it's worth the moment we take to look at it. There are benefits like the Kindle Lending Library that I haven't incorporated into my life, because I don't have a Kindle, but God Damn if a Kindle don't get to lookin' mighty good under th' prevailin' conditions. Amazon Instant Video has a long way to go, but what am I gonna say about it, other than "I expect them to weaponize this service to the extent that it will become a legitimate counterpoint"? If you live where I live, you hear things. I think I know what's next for them, and it's oblique. I do not get them. These people are fucking scary, the end.

If you are curious about what an established, fully operational generosity tradition like Child's Play is capable of, Jamie has a wrap-up post over at the official site that throws out a number like "5.7 million." I usually hem and haw about these numbers, become startled by them momentarily and try to hide from them, say that they "aren't numbers" or something to that effect, but we've long since surpassed the point where there is anything I can say to contextualize that information. Jamie could come to me next year and say that Child's Play was in command of (picture of a huge muffin with a cat peeking over it) dollars, and I would nod gravely, as though fully aware of the ramifications.