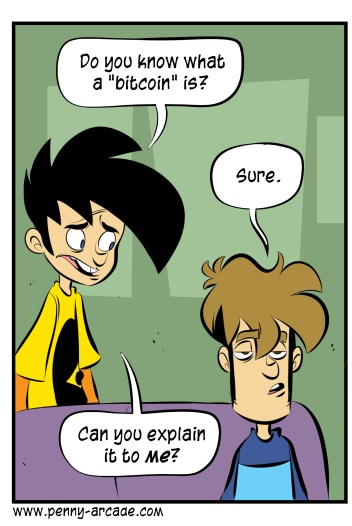 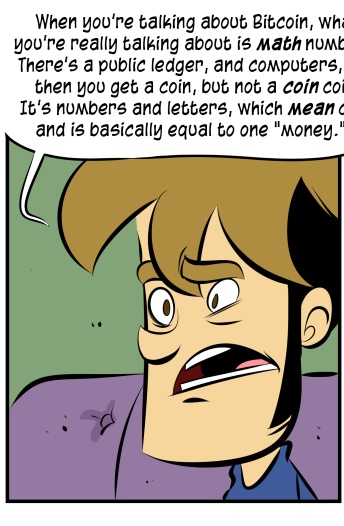 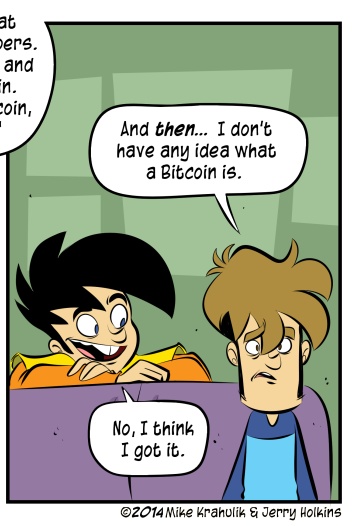 The fourth or fifth time I tried to explain Bitcoinz™, I started to notice a pattern. But every time I thought I was getting a little closer to real shit, like a cartographer whose previous journeys had prepared me for the next.

Eventually in these discussions I always find the stable, grey nucleus of my illiteracy, no matter how I approach the topic. I even went and read about it before writing this and I was still mystified. It's like a puzzle, except some of the pieces are social structures and some of them are engineering structures, and they "fit" in ways that defy Euclidian space. Also, money is money because we agree it is...? Now, I can't look away.

I was waiting for Gabriel to see Robocop before I talked about it, and he just did. The new model is sometimes called Robocop 2014, which is funny, because that would have sounded very futuristic when the first movie came out. I want to make sure that young people understand that we used to apply 2000 as a suffix to suggest that whatever came before it was incredibly advanced.

While he was watching the new one, I was watching the old one. There's still a lot to like there, I think. I watched the Harry Potter movies essentially as "visual aids" for the novels, they provided another perspective not my own or Rowling's, but by themselves they often glossed over stuff I found pretty fundamental. They rendered the sharpest spikes on the graph and data was lost. I get it, though. You can't do everything. Our universe is finite! It's been a problem.

So, it is interesting to view Robocop 2014 as a similarly interpretive work. Except it switches genres: Robocop is a horror movie, and Robocop 2014 is a superhero movie. If you can get past the scandalous facts of its reinterpretation, and I would suggest there is value in that, this movie is asking a lot of the questions you might have had the first time around. It looks at the same thing, differently. It goes much, much farther to integrate Robocop and Alex Murphy.

Some of this they lens through his family, which is interesting. But according to some gruesome Hollywood Ritual, we've lost Anne Lewis somehow. I'm not saying we've lost her in spirit, or that the new person they have playing her is no good. I'm saying that for some reason there is no Anne Lewis anymore. This is probably the thing that I like least about the film. Anne Lewis (like Ellen Ripley, or Sarah Connor) has always been in the Pantheon, as far as I'm concerned. It's a huge fuckup.

If you are creating a reboot of an existing franchise clinically engineered to expand the audience, you know, your corporate satire gets a little toothless. Topics get gummed. The first movie's deeply disturbing/disturbed statements on consumerism and mass entertainment decried and glorified them simultaneously in an ever escalating cycle. This has decent fangs for complicit corporate media, but it's cartoonish. As far as Robocop as a concept, I would think of this one as another camera, placed in a new location, that can offer other insights. Its completely worth seeing.