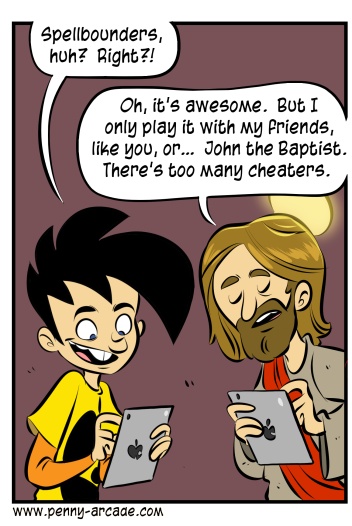 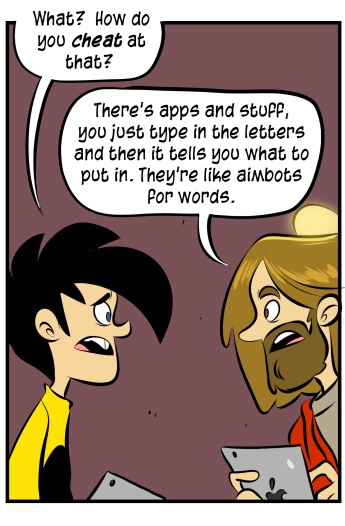 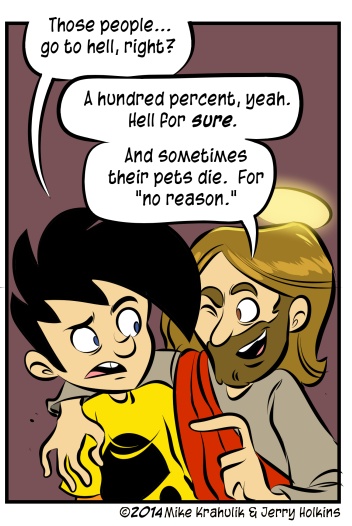 Gabriel is fairly aggressive in his gleaning of the iOS App Store, in a way I never was. He'd been using a Windows Phone so long that when he switched back, he was parched. I didn't know that the store updated on Thursdays until he told me. It's been fun, though, because where typically I have to present him with things for him to dismiss with maximal cruelty, being in the "exhausted, begone" position myself is Goddamned fantastic.

Our long, subconscious project to become a single luminescent organism continues apace, and one way you can discern that is how many games he brings me that feature the spelling of words as a core mechanic. But these games are also there for him to show me, coming out every week, and they're all trying to "do them" in whatever way seems to render themselves at the highest possible resolution. This one is a single player RPG, right? This one is a fighting game between authors that prizes speed, in the way the genre it mimics does. The interesting ones that aren't just Scrabble with the serial numbers filed off are typically, though not always, single player experiences.

Spellbounders is informed by fantasy and RPG tropes, but it doesn't suffer from TMS, or what is commonly called Two-Master Syndrome. It doesn't try to stuff any kind of fetishism in there that isn't a service to the game they're making. Here's a cool example: the rogue character, this Gnoll dude, can make words with "Wounding Poison," which reflect half of an opponent's damage back on them if they use letters you play in this way. Playing off of an opponent's last word is called Backstabbing in Spellbounders parlance, and grants extra damage - but it's not always the best play, and that assessment is incredibly fun for me. The standard caveats about competitive word games online apply of course, but I love this thing.

It reminds me most of Puzzle Quest; that's how it feels when he and I play it at any rate. Except instead of matching three, you're building the board with your letters in the way your character should, while trying not to build the board out too close to damage boosting Might tiles, or Spellbooks that enact various profundities upon the match.

It is "Free To Play," but if it were cruel about it I would tell you, or consider not featuring the product altogether. I chose to make it a six dollar game instead, by "Doubling The Amount Of" ability powering "Essence" you get from the board's Treasure Tiles, and buying the "Hero Season Pass" which unlocks all current and future characters. Opening Treasure Tiles sometimes gives you a "drop" in the form of an optional tile skin, which I must admit that I broke down on once. It's a premium presentation and experience, though, and six bucks is more than worth it. The core champ - Lexy - is no fucking slouch, and I like it when free games leave you plenty of play. That's one of the reasons I keep coming back to Hawken; I always loved the base, freebie mech, which is effective but also looks like a bipedal television. Spellbounders, though. Somebody who can self-heal, deal direct damage, and "autoplay" what the game sees as the best possible word is somebody who wins games.