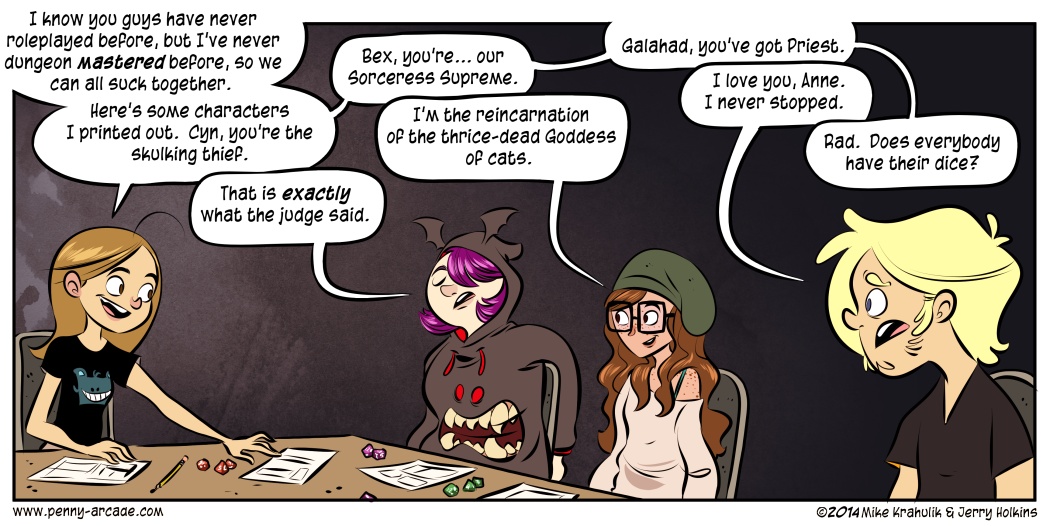 We missed Annarchy, and we wondered who she was hanging out with these days, so we thought we'd find out.

I like to posit on the "stage" of the strip that Tycho is some kind of despotic table tyrant when it comes to running a game, but in practice I usually don't have much opportunity to abuse players with ultradifficulty outside of the occasional stunt. I respect it, absolutely. But if I kill these fuckers, actually do it, then they won't have a chance to find out about my super awesome worldz.

Jamie's been cooking up a campaign setting for her group, something that allows for episodic one-shots inside an overarching thingamading. But, like Trek let's say, it's a hook that requires heaps and heaps of unique settings. Everybody into this kind of shit has tons of old aventures they've either played in or ran, either way, and Gabriel suggested she run The Changeling Baby.

I love that this has become a kind of shorthand. The real name of the adventure is The Night of A Thousand Hours, because I'm… you know, who I am, and I ran it in two-thousand nine. It must have made an impression on him though, and I'm glad, because no matter what I make he is my intended audience. It's a fun challenge, because we don't like the same things. I'm into etymological wand'rings and he is into farts. So he makes me curve it just enough off my core intention to be something a person who is not me stands some chance of enjoying.

I have all my notes from then, because the Cloud knows all, and while they're playing it in the strip I'll include some of that stuff alongside a certain volume of self-hatred occasionally ensconced deep within parentheses.