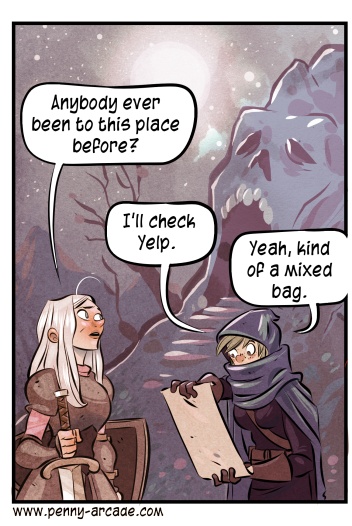 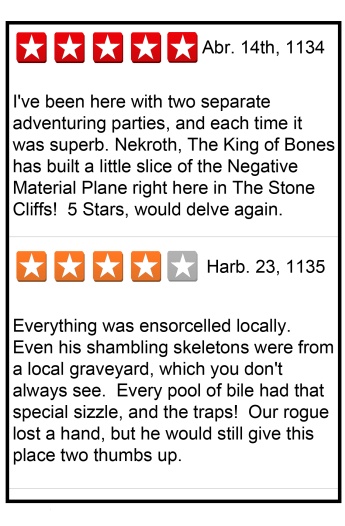 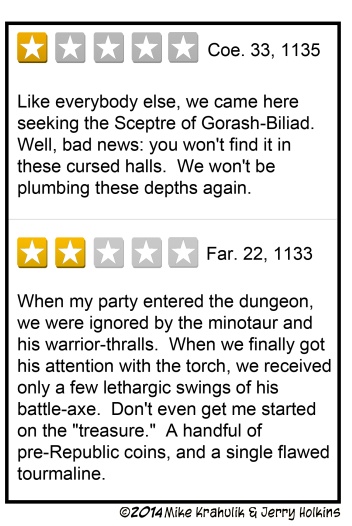 We were out at lunch with Skarth Quartz, talking about the frankly next level shit he's got going on in Table Titans, and we were talking about how Yelp could help adventurers. That's really it. When you hang out with comic artists, you have to call dibs on ideas like this, which then means you have an obligation to follow through strong. "Ensorcelled locally" is about as good as I can do, folks. Time to go home, maybe.

I am especially bad about drawing attention to our non-comic output. Part of it is that I think about it so much, it seems like it must be written on me somewhere, something that everyone knows. I feel like I'm always talking about it. But then, when I'm at PAX or someplace where I can talk to people about shit, people ask me if we're gonna do a new season of the show, or if we're gonna do new podcasts. It may be that I could mention it every other day and there would still be those who might miss it, because they are each of them protagonists, contending with their own innumerable villains.

Sorry; the word innumerable always makes me a little sick.

But that's what's up. Right? This stuff is just laying around, tons of it, and you can have a bunch of it right now. I don't know what your Monday looks like, but if this is the day you're just changing the backup tapes or whatever, let me help you out.

PATV: Technically speaking, Strip Search was actually the fourth season of PATV. We're still testing the ridiculous amount of content on those DVDs. But there is a really real Fourth Season you can observe now in all its richness.

DLC, The Penny Arcade Podcast: Even after the Kickstarter, some people want to know when this shit is coming back. It's back! I have the typical quote unquote creative temperament, so I hate everything we make, long before anyone else has a chance to hate it. But! The podcast is the exception. It's not something we "make," I think that's how it is able to find a loophole. It just happens while we're making something else. I would be a huge fan of this thing, if that weren't so weird. When I listen to it, I'm like, Finally. Somebody gets it.

Club PA: So, if you like the other things I just mentioned, you can get new episodes before they come out proper, download episodes of the show, and get access to the Staff Podcast which is is only for those bolstered by Club PA's healing rays. You also get access to comics early, access to high resomolution strips, and all kinds of other stuff. Robert designed it to be a pretty easy decision, and I think he succeeded.