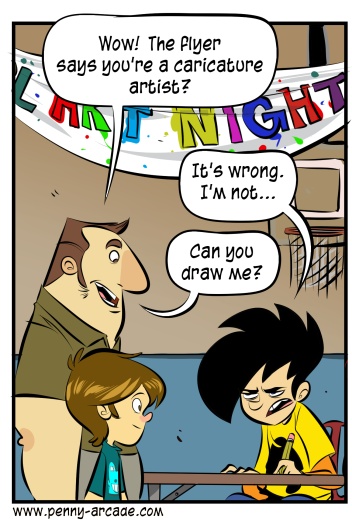 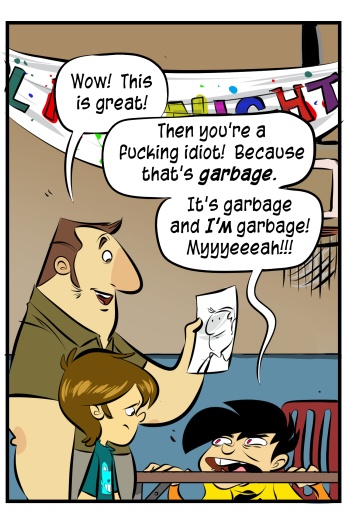 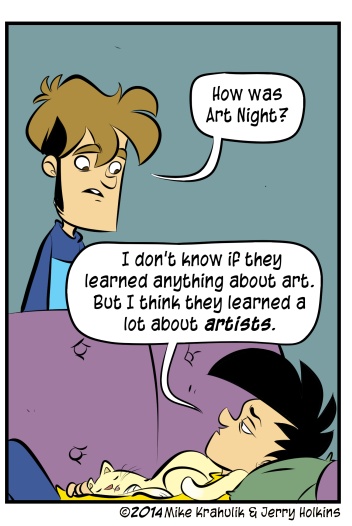 He did have a real Art Night, but I assume that the second panel did not actually occur, which would make the third panel a lie heaped upon a lie. He drew boys and girls, he drew boys with their cats and girls with their dogs, he drew them playing basketball and soccer, he drew them as fey folk, occupied with dreams of every sort. He drew a single Gabriel, also, for a dad who must have been very surprised to see him there.

As a backer of Hex, and a player of Magic: The Gathering, I'm at the crossroads of the lawsuit. Just as in the legend, it's a place where devils hold sway. I know many, many people at virtually every echelon of both companies, and none of them can talk to me.

The complaint has a few linguistic hors d'oeuvres of exotic manufacture, but for legal documentation it is surprisingly legible. So legible that it is almost certainly intended, at least partially, for a gaming audience. Cloning is a weird space, conceptually; there's something we feel intuitively when we see it, but - as we have had the pleasure to discover personally - trying to "intuit" the law is an awesome way to lose in court.

Challenging upstarts and usurpers is the metagame. This is the blood one must give to the God thereof; this is what copyright law makes you do, because if you don't, it offers up the guts of your company for colonization. So, that's that part.

The innovative part of Hex is not the card play. Magic forms the basis of an entire genre, and has been informing competitors since I was in high school. We could draw fine-grained distinctions between how each manages resources, or handles blocking order, but whatever. The innovative part of Hex is that the base cards have "three sides," one of which allows permanent customization of function. Decks of these cards are "characters," used competitively like you would expect, but they're also used in ongoing campaigns, or cooperatively with other players. This is an example of the relationship between map and territory.

The game referenced in the complaint is the Precambrian invertebrate version, Hex in its most rudimentary form. Hex has no physicality to synchronize. It's fundamentally a digital creature, with everything that entails, which is what I suspect makes it such a threat.

The complaint makes very interesting comparisons between M:TG and Hex, down to the granularity of specific cards, which are incredibly damning to what we now call the layperson. Except courts are surprisingly abstract places, chockablock with neon entities and non-Euclidian geometry. They're terrifying places, lorded over by thoroughly finite, deeply imperfect beings, as are we all. People rightly avoid them, when they can.

To be entirely direct, this has a lot more to do with the future of gaming than whether or not the PS4 is running Watch Dogs at 1080p. That's why I can't look away; we are literally demarcating the boundaries of the possible.