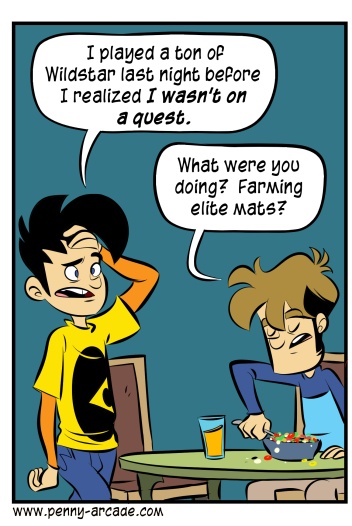 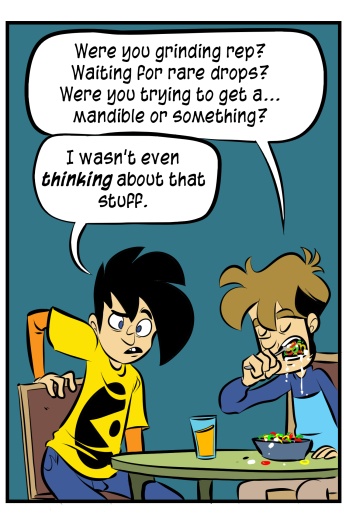 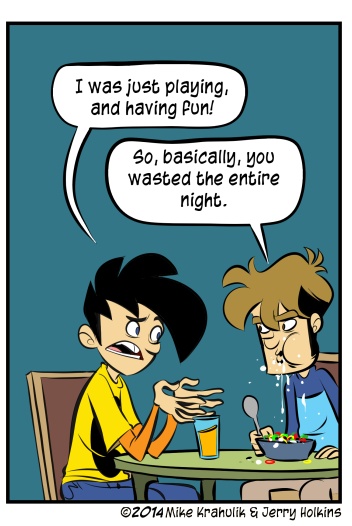 I don't think it's entirely the fault of developers or the genre or any of those things. But we have been so rigorously trained in how to play Massively Multiplayer Games, in precisely the way we train rats, that you fall into that groove. Except it's not a groove, groove. The funk has long since fled. It's more like a rut. I have to break some of this stuff down to enjoy it again, I think. I have Optimization Sickness.

All games that you play for awhile have mechanisms to mark time, or systems to absorb it, all of them. Wildstar is not different in those ways, it's not Ratchet and Clank or anything. You absolutely have a career you are embroidering in the MMO sense, with potent chrono-sinks like player and guild housing that tie back into the main loop. And it's not a twitch game in the classic sense. But it borrows the trappings of twitch games in a way that breaks up the mental lattice we have around some of those play structures.

You can get a sense of what I mean in the video they did about "raidz." Between randomization and explicit (and by explicit, I mean didactic) manifestations of danger, it's going to another place. I really want to play the game they're showing in that video with a gamepad. Does that make me a bad person? I think it probably does.

You might have noticed an art change over at The Trenches, and that is because Monica Ray (of Strip Search, and Other Fames) is now a storyboard artist on new cartoon show Bad Seeds(!!!). What this means is that Ty Halley, who was writing this season of Trenches, is now writing and drawing The Trenches. It could literally say "The Trenches, By Ty Halley" and it would be accurate. It's fun to step outside something like this, and have a chance to be a fan of something you started. The comics are great, the Anonymous Stories of Development Woe (ASDW) are fascinating, and there's years and years of both in the archive.