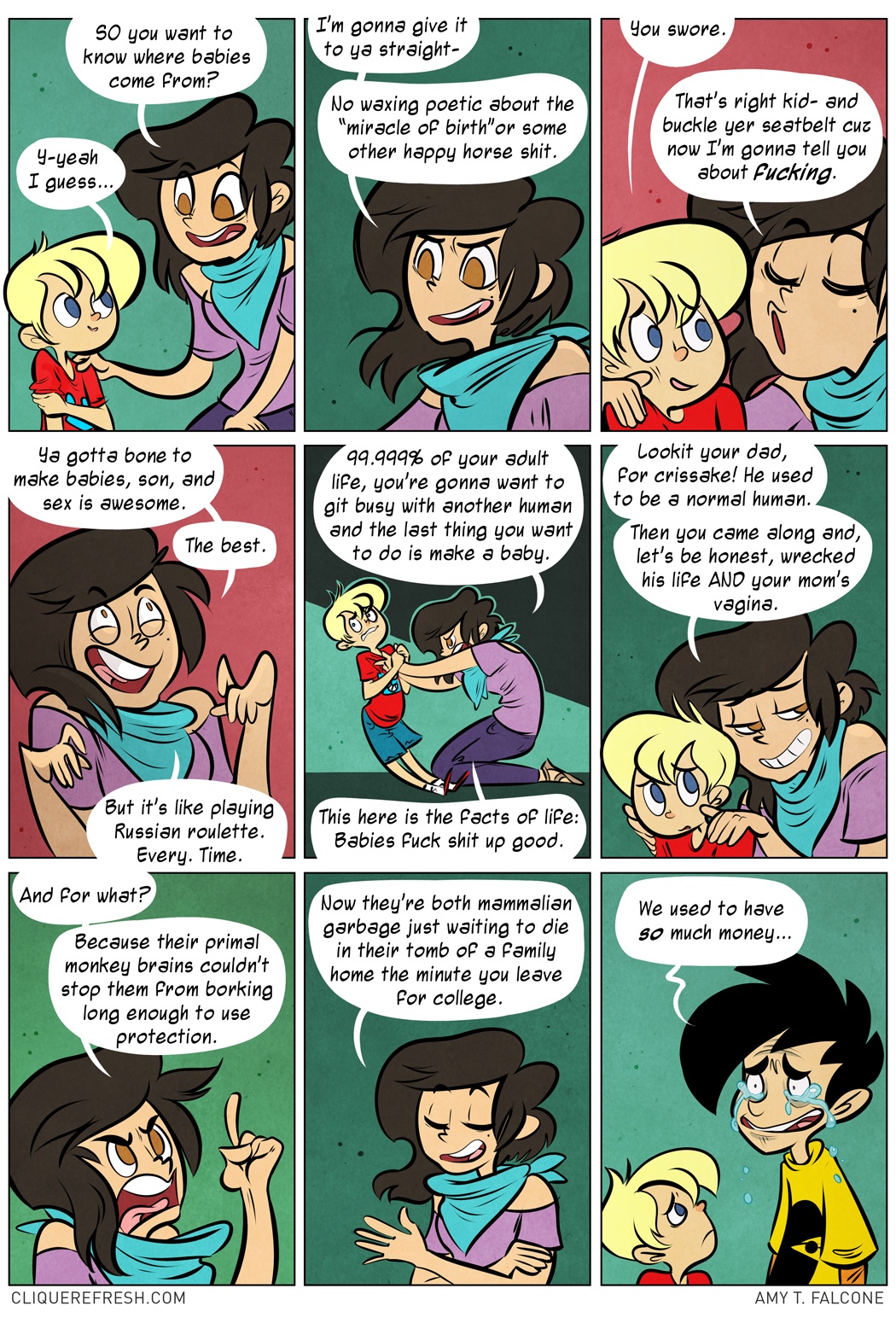 Amy The Falcone, who you might remember from Strip Search's Team AmErika, is a monster. Not, like, a lycanthrope or something. But she absolutely has a mode labelled "beast."

We're fans of our own show, I guess, in direct abrogation of Biggie's 4th Crack Commandment, and in the age of the Social Internet the show is still going - it never actually has to stop. Watching her continuously become herself over the course of her online comical works - Cardigan Weather, and now the Kickstartified Clique Refresh - has been a tremendous amount of fun for everybody over here. And now she's in our base, swearing at our larvae.

The Oculus Rift Development Kit 2 is coming in hot. Like, hot. "Corporal Ferro bringing the dropship back down to LV-426" hot. The DK1 was, by the time I used it, an increasingly sensible device. Ben Kuchera was such a devotee of the machine that it was infectious, and he knew how to set everything up so that the equipment was minimized as a distraction. There were many, many demos out by then, also. Gorb wasn't a fan, but I think I liked Hawken best as a demo. Because you could look around independently of the mech's facing, I felt like I was in the machine as opposed to being the machine itself. That, uh... worked for me. In general, "games with cockpits played with flightsticks" are rad, not only because they are rad inherently but because they naturally reinforce all the stimuli. You can expect to see much, much poetry written about Elite: Dangerous in the coming weeks.

It's going to take a bit for some of these things to get shaken out, but watching that process happen in real-time is amazing. One of the first opportunities a person has to be legitimately shocked by this fucker is a button down at the bottom of the Oculus Configuration Tool called "Show Demo Scene" which doesn't really sound auspicious but is actually auspicious as fuck.

Like I said before, I was trying to get it set up on Grab's machine. It's the first bit of success I had that didn't involve the entire enterprise crashing into the runway. Because of the new positional camera, the comically simple virtual desk they render in front of you is interactable in a really natural way: by leaning closer to it. As a layman, I didn't understand that the inability of the device to recognize this type of use was a problem for immersion. I moved my real head closer to the plant on the desk, which is what I used to do with the old kit to anchor myself in actual space, except… now I got closer to the plant. The second I did that, I started to move my arms in front of me, trying to find them. It was a swimming sensation: I felt lost in some kind of undefined material. Photons, essentially.

Maybe that doesn't seem good, or like something you would want, but what it means to me is that it's happening just like in the Ron Paul gif. I hit my chin on the edge of my desk, where my teeth meet the gums, and it was as surprising as anything that has ever happened in my life. The real desk, and room which contained it, were gone.