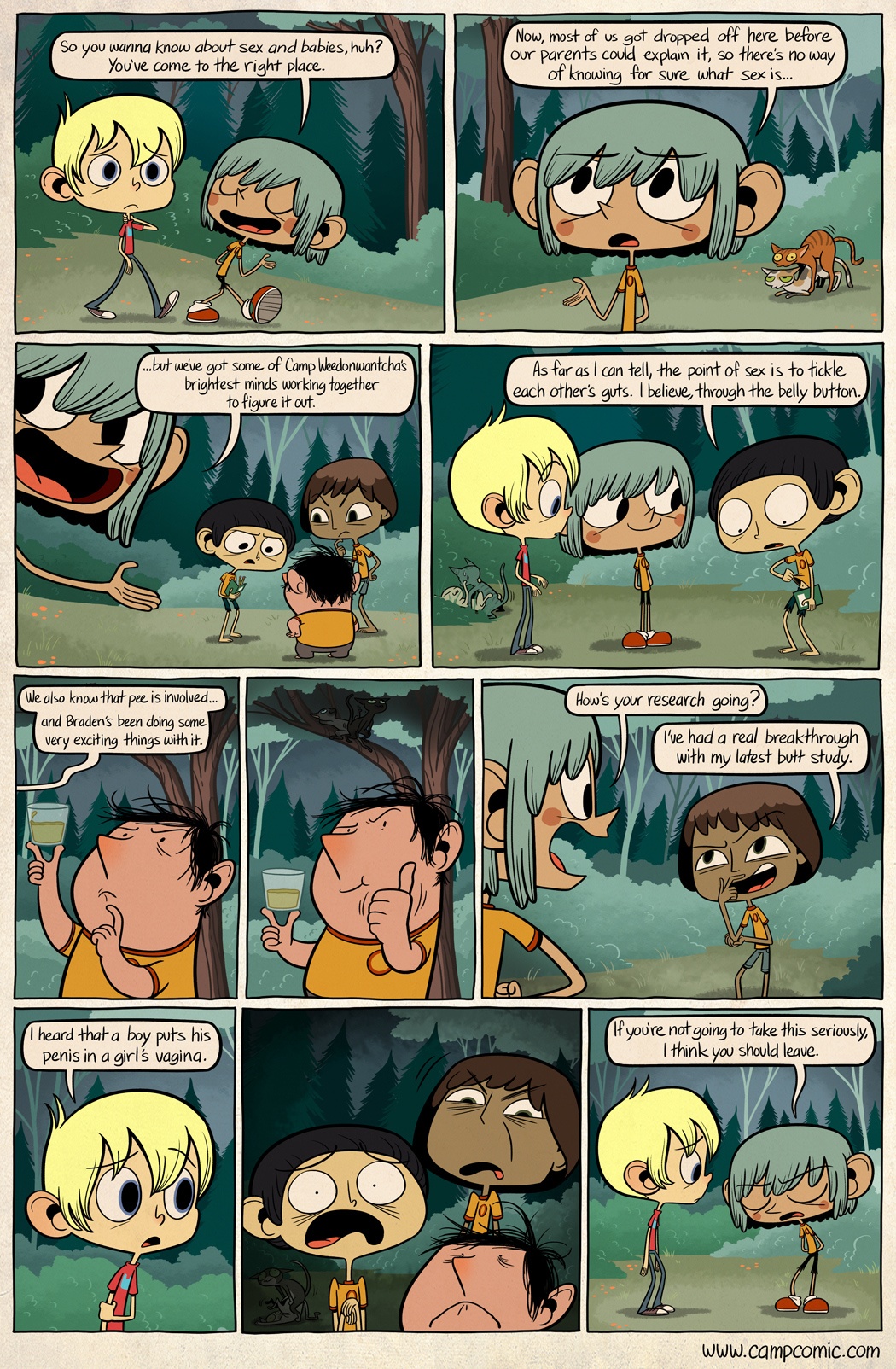 One of the prizes for winning Strip Search was office space. Not the movie. Like, space in the office. Katie's room is on the way to mine, and she is usually there in the dark, headphones on - a white pair of Sony MDR-V55's, I think - with a look like she is attempting psychically bore her way through the drafting table.

Technically I suppose she had the use of an office for a year, as per her victory, but extending that was a pretty simple call. Having her around is really great for Mike. He and I can speak usefully on a number of topics, but I can't really have a productive conversation with him about the technical aspects of art. She gets tapped a lot to consult on his stuff. Like drawing hair. They have a lot of conversations about hair.

Katie has been rocking Skadi for awhile, but Camp Weedonwantcha - the work she pitched at the culmination of Strip Search - is as sick as a 360 Flicktwist with a Backbiter suffix. It's precisely what we wanted. Her guest strip is "in universe" for both our comics, on some DC Elseworlds type shit, and it can be found right here.

I keep remembering things that happened at San Diego Comic Con, but they're gaming things, so let's run with it.

As happens at legacy shows, they tend to release spores into the surrounding town which grow stalks and hideous, looming caps. So it was with the Xbox Lounge Thing (probably not its real name) which was substantially more robust than the nominal offering they deployed to the show. I don't go to E3 anymore, so a lot of what was here I had only seen in screenshots. This was an improvement.

There was an open bar there on the night I went, which I miraculously did not take advantage of. A friend of mine ended up with white wine in her shoe, which seems like an internationally recognized cutoff point. I watched Andrew Russo, whose name I swore to remember, fail at a bomb defusal minigame in The Evil Within over and over until failing at it in different ways became the game. Eventually, the bomb started blowing up before he even got to it, which seemed to imply that the game was simply tired of our shit. I loved the look, though. Its calibrated to massage the nostalgia gland.

I can't stress this next part enough: Do. Not. Sleep. on Evolve. Don't fucking sleep on it. They just bumped it; it's coming out in February now, maybe I'll get it as a birthday present. There is more care and character in a single hunter's idle animation than is contained in many games. I had played it before, but with a different monster and different hunters, and every time I see it again I just want to find somebody who will let me give them money for the fucking thing.