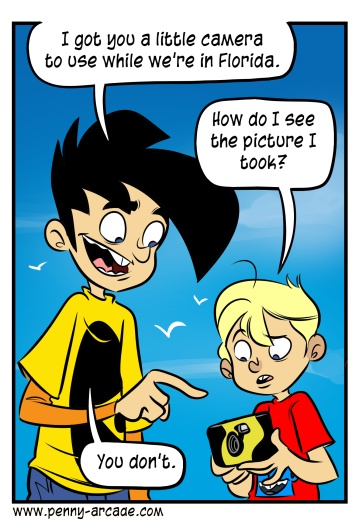 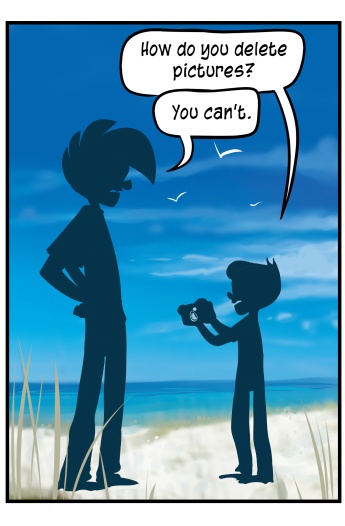 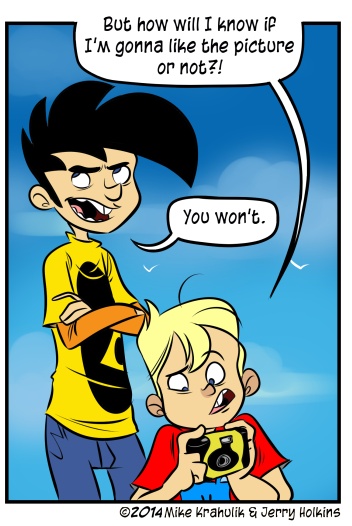 We were invited by NASA to see the SpaceX launch with our sons, though the weather didn't cooperate while we were there and it had to launch the next day. The trip was rad, though. A trip whose core purpose did not occur still managed to be rad. So, imagine how rad it must have been. We brought Van (who does PA: The Series) over with us; I think there's still something good there.

The boys got along very well, all things considered. Also, you can be very interested and even obsessed with technology and still be surprised by how fast it moves. You adapt to the new stuff. But if you don't know anything about "film," or winding cameras, or exposure, the opaque little boxes we handed them were not cameras in any meaningful way.

The "launch" was scheduled for two-sixteen or so in the morning, which these boys were not aware was a real time. In what will no doubt be the infinitive form of a verb whose conjugations will haunt him all his life, I allowed Elliot two, perhaps three sips of Coke. Already, gruesome permutations have emerged. I essentially have an eight year old teenager, one who maintains in Iron Maiden in reverse, until such time as he runs out of food or whatever in there and emerges all sweat and need. He is not wrong to suggest, as he so often does, that virtually every part of these arbitrary hierarchies is bullshit. The only advantage they have, really, is that they are infinitely preferable to the abrasions of the Chaos Winds.

I gotta perform my sister's wedding this weekend, which is exciting because I've never written anything like that before, and also because of love or whatever. I have the seed crystal of it, and it's forking out through the solution now. Making such an endlessly iterated ritual singular without the use of American Ninja Warrior-esque challenges or at the very least a timely murder is going to be tough. I think I might like her girlfriend better than her, though; maybe on the form I fill out after the ceremony, I can make her girlfriend my sister and and make my actual sister the one I am now obligated to endure.

The upshot is this: the next time a couple asks me to jokingly perform a marriage ceremony at PAX, they'd better mean it, because I'm all ordained and shit. Now, the spell of binding is terrifyingly real.